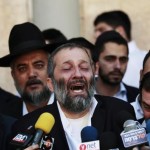 While the Kulanu and Yahadut Hatorah parties are expected to sign coalition agreements today, Wednesday, 10 Iyar 5775, talks between Likud negotiators and the Shas party have broken down due to demands made by Aryeh Deri.

Some Likud officials feel that Deri has to “get real”, explaining his party has only seven seats yet he continues making demands as if he is the major coalition partner.

Deri explains that during his election campaign the party promised to address the “transparent Israelis”, the two million Israelis living under the poverty level who are generally forgotten. Deri insists that unless Prime Minister Binyamin Netanyahu agrees to his demand to remove the 18% value added tax from basic items he will not sign on for he will not betray Shas voters. Deri adds that his party must control the relevant agencies to give him “the tool box” to deal with growing nationwide poverty.

While some chareidim applaud Deri’s position, others warn he is pushing the prime minister too far and if left without an alternative, Mr. Netanyahu can opt to set up a coalition with the Labor and Yesh Atid parties, which would give him 65 seats and then the chareidim would be in opposition for a second consecutive coalition, which would result in devastation for the chareidi tzibur and its mosdos. They point out that with all due respect, there is one week remaining until the prime minister has to present his coalition and Mr. Netanyahu is obviously aware that the time limit on his presidential mandate is quickly running out.

As negotiations continue, MK Moti Yogev of the Bayit Yehudi party told Kol Chai Radio that his party has laid down a number of demands, including a commitment from Prime Minister Binyamin Netanyahu that he will not announce another construction freeze in areas of Yehuda and Shomron as well as in Yerushalayim as has been the case in the previous administration.

Yogev added that while Bayit Yehudi remains committed to its voters and ideals, the party leaders remain realistic amid the realization one cannot expect to receive everything one demands. He acknowledged the Netanyahu administration is under enormous pressure from the Barak Obama administration and that the prime minister’s hands are tied to some extent.