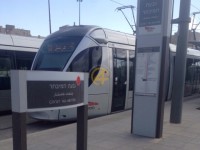 An Arab terrorist who tried to stab passengers at the Givat HaMivtar Jerusalem light rail station was shot and wounded by a security guard, who B’chasdei Hashem escaped unharmed. The attack occurred shortly before noon in the French Hill neighborhood of the capital.

12:18 IL: An Israel Police spokesman via Twitter reports the terrorist was shot in a leg and lightly wounded. He adds that the terrorist tried to stab a security guard.