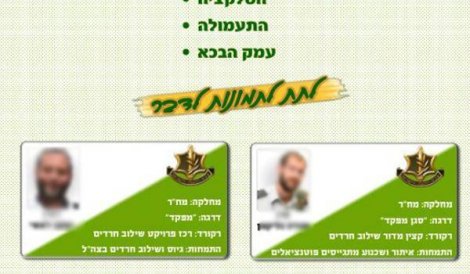 A new pamphlet has been released targeting to the so-called ‘chardakim’, chareidim who serve in the IDF. Some of the soldiers whom have seen the pamphlet express a fear, stating the release of the publication represents a threat to all of them.

The pamphlet is entitled “Shmad”, circulated in chareidi areas including the names and photographs of officers in charge of the chareidim. IDF officials are taking the pamphlet seriously too, passing along the information to the relevant military agency. One of the officers is a major who was instrumental in pushing along the chareidi enlistment program.

Chareidi soldiers and officers are calling on authorities to address this once and for all, explaining it is unacceptable that they must live under constant threat. They add that they view the pamphlet as a threat to all of their lives.

Unquestionably, the new pamphlet will make some chareidim contemplating induction to reconsider, and this too has IDF officials concerned.