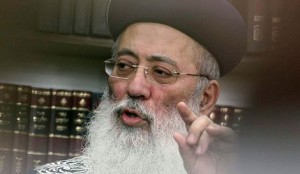 Jerusalem’s Chief Rabbis, Rabbi Aryeh Stern Shlita and Rabbi Shlomo Amar Shlita, on Tuesday, Rosh Chodesh Sivan 5775 met in City Hall with Mayor Nir Barkat along with chareidi elected officials. The meeting was held to discuss a Christian event set to take place in the Jerusalem Arena Stadium owned by the city. The event is scheduled to be broadcast to 21 countries around the world.

At the beginning of the meeting the mayor explained that he will not agree to anything discussed until he receives a green stamp from city legal experts. The rabbonim and chareidi councilmen called on the mayor not to permit the Christian event.

The mayor did promise those present that he will send a directive to all city agencies to probe into any event that gives the impression of being missionary in content, including consulting with rabbonim prior to granting a permit for the event.