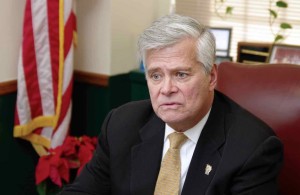 The former New York Senate leader and his son have been indicted on corruption charges in Manhattan federal court.

The indictment was returned Thursday against 67-year-old Dean Skelos and his 32-year-old son, Adam.

The Long Island men were released on bail earlier this month.

Dean Skelos was New York state’s most powerful Republican when he was arrested on conspiracy and extortion charges. He was accused by prosecutors of taking official actions so his son could receive more than $200,000.

The indictment added to the accusations by claiming that Adam Skelos received more than $100,000 in payments and health benefits from a medical malpractice insurer. The indictment says the insurer provided Adam Skelos with a no-show job while it lobbied his father on legislative matters.