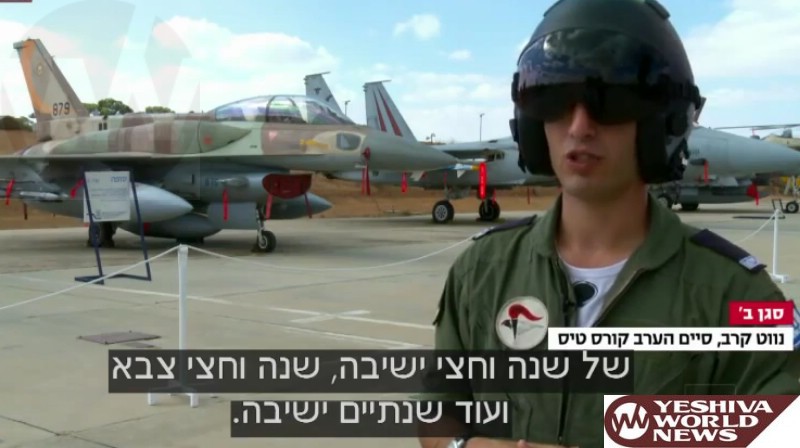 One of the graduates of the Israel Air Force’s 170th pilot training program was 2nd-Lt. “B”, who is married and left yeshiva to enter the prestigious three-year program. “B” began in a hesder yeshiva, learning in Yeshivat Torah B’Tzion in the capital, and studied for 18 months, then moved to the IDF service and then two more years in beis medrash for a total of five years. He is older than most of his colleagues and married as well. Rav Yitzchak Neria explains that “B” is modest, a lamden, a gentle person and a Yiras Shomayim. The rav adds the training program is broken into six parts, and “B” never abandoned his limudim despite the rigid schedule, completing one of the six sedarim of Mishnayos with each part of the course.

He explains to Israel News that he spoke with his rosh yeshiva, telling him that he wishes to enter the pilot training program. “He looked at me with a face signaling ok but you are married and you’ll have a family. My wife said ‘ok if you want a course but I want a child’”.

His wife adds “It was most difficult but I am fine and support him for he is doing what he loves and that he realizes his full potential, especially if it in the military”.

Mrs. “B”, is known as “H”, and her identity remains classified too. She is a 2nd-lt. and a computer engineer in the IDF, serving in a classified intelligence unit.

“H” admits it is difficult, explaining “at first he was at home and now he is not. The difficult thing for me is becoming accustomed to being alone”.

During the first year of his course “B” was given special permission to take a break to accompany his wife for the first ultrasound of their child. “H” adds that while it is not easy, with the baby it is easier since she is no longer alone. The actual birth came at a critical time in the course, and he was not able to get out to be with his wife. She explains that she was aware he was not going to be able to get out that entire week. She called a friend who accompanied her for the birth.

However, when “B” heard his wife was in labor he awakened his officer at 5:00 AM and received permission to leave. Today their daughter is 2-years-old. They are residents of Shomron and while “B” has his wings, he does not get home daily for now the new graduates must continue perfecting their skills by taking part in advanced training. They are happy for smartphone technology, which permits him to see his child daily and for their daughter to see her dad.

Both plan to continue advancing their military careers and B’ezras Hashem has more children, admitting it is not always easy but they remain optimistic.