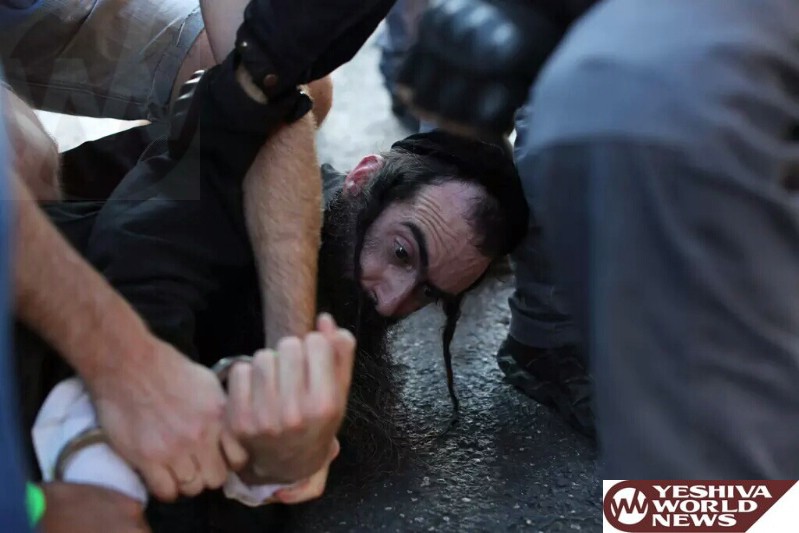 Labelling someone a murderer when no one was murdered is a serious allegation. Nonetheless, it seems that this is the conclusion that must be drawn when confronted with the halachic evidence –anyone who stabs another with a wound that has the potential to kill someone is labelled a murderer. But first, let’s begin with the facts:

According to a report on the Yeshiva World, six people were stabbed this past Thursday afternoon during Jerusalem’s annual gay pride parade and one Jewish suspect was arrested.

Yeshiva World News reports, “The wounded received treatment at the scene and were evacuated to hospitals. Two were considered to be in serious condition and another was in critical condition.

The attacker is Yishai Schlisel who also stabbed people at the parade in Jerusalem 10 years ago and was released 3 weeks ago.

Pictures of the suspect shown on Israeli television showed a man in ultra-Orthodox garb with a kitchen knife stabbing participants in the parade.”

Now let’s analyze the halachic evidence to our above claim. In Halacha the death penalty or the lashes penalty may only be administered by an earthly court if there was a warning issued immediately prior to the crime or action being committed (See Rambam Sanhedrin 12:2, Rashi Chulin 41a). The warning must include the violation as well as the penalty for violating it. This warning is called “Hasraah.”

But what if there was some doubt associated with the warning – some other element that we are not sure whether it will happen or not – that causes the warning to no longer be immediately before the action being committed? Let’s take as an example a man taking an oath not to eat “loaf B” if he will also eat “loaf A.” The violation of an oath that involves an action is punishable with lashes. If the man was warned before eating “loaf B” (or the oath loaf) he still does not yet incur the lashes penalty because he did not consume “loaf A” (the conditional loaf). The Talmud records a debate about warnings where the it is not clear whether the action or crime will have been committed. The halachic conclusion is that it is indeed considered a valid warning.

This is also the view of Tosfos in Bava Kamma 44b (“Havei Lei Palgah uPalgah”). The Talmud in Sanhedrin 76b indicates that when dealing with metal striking someone in a manner that could kill a person perforce must be considered a violation of the Torah prohibition of “Lo Sirtzach” the murder warning issued by the witnesses.
Now, it happens to be that if the victim does not end up dying – there is an exemption, an exclusion, in the punishment that the murderer receives. However, the action that he did is considered and fully labelled an “act of murder” according to Tosfos – even if the victim did not die.

There are further proofs to this position that are cited in Sefer Zichron Tzvi Meir vol. XIV (siman 33.)

We find a similar concept espoused by Rav Moshe Feinstein zatzal (see Igros Moshe OC II #7) in regard to the term “Maisis – an enticer.” Rav Moshe states that the term is applicable to anyone who attempts to entice another Jew to violate a Mitzvah in the Torah – it is just that the death penalty is reserved for an enticer who attempts to get a Jew to violate the prohibition of Avodah Zarah – worshipping false gods. Rav Feinstein cites the term Maisis used regarding the snake who tried to convince Chava to eat of the forbidden fruit.

The issue, clearly, is not mere semantics. It is important to label violations of Torah law properly, in order to ensure that these violations do not occur in the future, chalilah.
While certainly, marching publically in a parade where an anti-Torah, toayvah lifestyle is proudly upheld is wrong – the people that are marching are still neshamos created in Hashem’s image. Taking matters in one’s own hand like the perpetrator has done, twice, is a complete and utter violation of Torah law and must be denounced by the Torah community.

As Rav Elyashiv zatzal has consistently pointed out, we Torah Jews do things in a Beis Din and not on our own [vigilantism] (Shiur on BM 113a). The verse in Dvarim (17:11) states quite clearly, “Al pi haTorah asher yorucha – according to the Torah that they shall teach” – this refers to the Beis Din – not to one’s own individual feelings about how things ought to be. This is what we must follow and we must sway “neither to the right nor to the left.”

It certainly does not have to be said that we should all be looking at such an act with a sense of disgust and anathema.

CULTIVATING A FEELING OF ANATHEMA

Rav Eliyahu Eliezer Dessler zt”l (in Michtav M’Eliyahu Vol. II p. 548) explains that in the time of Yehoshua, all of Israel was punished with the loss at the battle of Ai, even though it was only one member of the entire nation of Israel that had actually sinned. Why then was the entire nation punished? Rav Dessler explains that it was because they did not look with anathema at anyone who might violate the command of Yehoshua not to touch the spoils of war.

The lesson is clear. We must unequivocally and immediately verbalize how horrified we are at such action, so that Chalilah we not tolerate violence like this among ourselves.