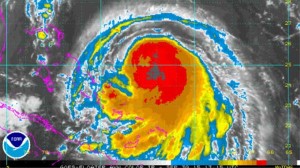 By Rabbi Yair Hoffman for The Five Towns Jewish Times

Hurricanes can do a lot of damage. They can damage expensive Sukkah panels as well as precious schach mats. In light of the current trajectory of Hurricane Joaquin, the question is probably being posed throughout the east coast. May I take down my Sukkah now? Especially if my minhag is not to eat it in it on Shmini Atzeres? Of course each person should consult with his own Rav or Posaik, but here are the underlying views.

The Gemorah in Sukkah 48a actually discusses the general prohibition in taking apart a Sukkah on Chol HaMoed.Believe it or not there are four underlying issues involved here. We will briefly discuss all four of the underlying problems.

The first issue is the prohibition of Stirah, destroying. This a prohibited malacha on Chol HaMoed. There is a debate among the Rishonim whether this prohibition is Biblical or Rabbinic. The Ran’s view is that it is indeed, biblical. Other Rishonim seem to imply that it is a Rabbini prohibition. Either way it is not considered Tzorech haMoed – the needs of the holiday.

NOT SET ASIDE FOR LOSS

This prohibition is, generally, not set aside for the loss of a Sukkah, as we see that it is not set aside out of a concern for theft (See Mogain Avrohom 540:3). There are some Poskim who write, however, that saving a Sukkah for another year is not tantamount to Stirah and disagree with the aforementioned Mogain Avrohom (See Emek Yehoshua Siman 32, by Rabbi Yehoshua Mamon, a contemporary Sephardic Posaik). Nonetheless, it would seem that the Mogain Avrohom’s view would be more authoritative for Ashkenazim.

WHEN THERE EXISTS A DANGER

A second issue is if there is a danger in leaving it up. The Shulchan Aruch (540:1) permits taking the Sukkah down if there is a danger. To apply this to our case, if the Sukkah is situated in a location where it could cause damage to the house and people in it or other passers-by, then it would seem to be permitted. This is not an issue that should be easily dismissed. A Sukkah in the front of a house or situated next to glass can be quite dangerous.

A third issue is that of Bizui HaMitzvah. The Sukkah and its parts are sanctified on this Yom Tov no different than the Korban Chagigah. Taking it apart to make it no longer a functioning Sukkah is a negation of the Sukkah and is prohibited by a number of Poskim (See Orchos Chaim 638:1 Spinka and Rav Shmuel Kamenetsky Kovetz Halachos page 135). It is a Bizayon to the Mitzvah to take it apart while the Mitzvah is still applicable. As mentioned earlier, however, a danger would allow one to do so. There is also the view of Rabbi Chaim Dovid HaLevi (Assei Lecha Rav Vol. VII #43 that a vandalized Sukkah is a Bizayon to the Mitzvah of Sukkah too. Perhaps one might wish to compare a vandalized Sukkah with a hurricane-destroyed Sukkah. Once again, though, this is the view of a Sephardic Posaik. The aforementioned Mogain Avrohom might disagree.

THE MITZVAH OF SUKKAH STILL APPLIES

A fourth issue, of course, is that there is still a Mitzvah of Sukkah – even on Shmini Atzeres, notwithstanding any Minhag otherwise. It could very well be that the weather conditions would not be bad and we would have taken apart our means of fulfilling the beautiful Mitzvah of Sukkah. What heter do we have in denying ourselves the opportunity for this Mitzvah?

Rabbi Shaul Nathanson in his Shoel UMaish (MD Vol. III #28) forbids taking it apart under all circusmtances other than danger. The Ikrei HaDat of Rav Daniel Tourney (OC 2:68), an early Acharon from Amsterdam also forbids it comparing it to ripping a Beged of Tzitzis. Rav Shmuel Kamenetsky as cited in Kovetz Halachos page 135 also seems to forbid it.

On the other hand, the Tzitz Eliezer (Volume XIII #68) permits taking it apart when there is a concern or a need to do so. Surprisingly, Rabbi Nosson Gestetner z”l in his Lehoros Nosson (Vol. VII responsum #48 and #49) also rules that it is permitted to take it apart if there is a great need, provided, of course, that one does not use any part of the Sukkah for another use.

Some Poskim try to make an inference from the Mishna Brurah in 666:1 that there is no prohibition of Stirah involved here, because he only mentions the idea of the Sukkah still being of use (fourth reason to be mentioned later). The inference, however, is not compelling.


Clearly, Sephardim may take the Sukkah down if there is a genuine concern of damage on account of the hurricane, and everyone may take it down if the Sukkah is situated in a place that could lead to danger. For Ashkenazim it is a debate among the Poskim. It is this author’s view that since it may not even be an issue in regard to the upcoming storm that one should not take the Sukkah apart prematurely unless it would be dangerous, but if someone wishes to do so, he certainly does have whom to rely upon.

Regarding a pop-up Sukkah that was put up on Chol HaMoed in the firt place – one can certainly take it down.

Of course one should consult one’s own Rav or Posaik and not necessarily rely upon what is written here.

May we all have a safe and enjoyable end of the Yom Tov.