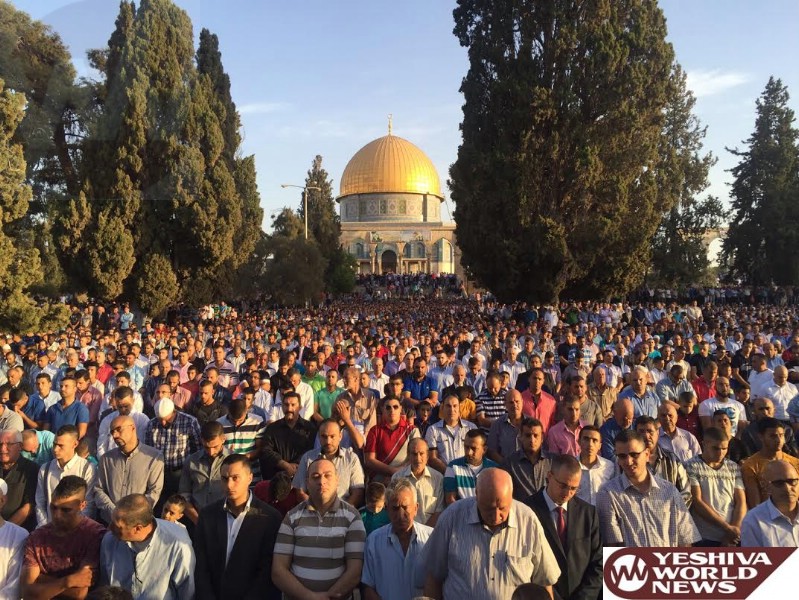 As Israeli politicians and security leaders work to calm the current wave of Islamic terror, Sheikh Raid Elkim, who is well acquainted with the youths in predominately Arab areas of the eastern capital, warns the young prefer to die and become martyrs and receive the items after death as is promised to them.

“These youths have no future, no money, and therefore they prefer to opt for the “reward after death” he explained. The Islamic spiritual leader made his comments during an interview with MyNet.

Elkim, a resident of the Beit Haninah area of the capital explains this current wave of violence is the Muslim way to achieve deterrence against any Israeli activities on Har Habayis in the future. This is their way to tell Israel to prevent Jews from continuing to visit Har Habayis.

When asked if he really believes that Israel plans to make changes on the holy site, the sheikh explained in recent months Israel has divided the time on the site, barring Muslims from 8:00-11:00 AM. He questions how Muslims car be barred, even for a few hours, “for this is our holy site” he adds, stating “When one sees a small fire does one try to extinguish it or does one wait until the fire spreads”, recommending that Israel reads the message that is being delivered.

“Most of the kids who perpetrated the recent attacks are from the city but they do not know one another. They live side-by-side with the Jews. The Jews are not the problem but rather the government is the problem” he explains. He warns the young feel despondent, without a future, without money and without hope, so their buy a knife amid an awareness they will die, become shahids, and they will then be granted their “promise” in heaven and for them, this is sufficient.

Elkim insists “Most of our people are secular. This is not a religious war but there are those who are trying to portray it as such. It does not matter if it is tomorrow, next week or next month – the Jerusalem Arabs will pay the price. Today most villages have three or four entrances but today, most are left with one entrance and they must pass stringent security inspections. Now they are also inspecting vehicles, removing some form the road and issuing summonses”.

Elkim feels the leadership of the Jerusalem Arab population is not strong enough to bring an end to the violence. He feels the current situation is in the hands of Prime Minister Netanyahu. “When he announces Har Habayis is holy to Islam and Jews are no longer permitted to visit, then things will quiet down”.