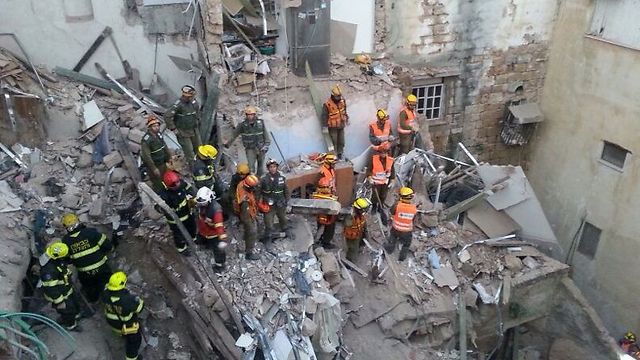 It has been over a year and a half since faulty gas lines in a Gilo Yerushalayim apartment caused a powerful explosion that killed five people. The tenants of the apartment building of the southern Jerusalem neighborhood were relocated as the building and apartments were renovated. However, today, residents are still unable to return to their homes.

MK David Amsellem, who chairs the Knesset Interior Committee, released a statement that Jerusalem Mayor Nir Barkat should have appointed a senior official like the city’s director-general to make sure the renovations are done in a timely fashion, but this is not the case. Amsellem laments the fact that the apartments of 12 families were ruined in the blast 21 months ago, and since then they have been shuffled from one government agency to another.

Amsellem explains that when the Versailles wedding hall catastrophe occurred in Yerushalayim, the previous mayor made certain to take care of the families but this is not the case today.

Amsellem took part in an official visit to the site along with MKs Miki Levy and Uri Maklev, as well as Deputy Minister of Housing Jackie Levi.

Amsellem promises to remain involved and calls on the city to pick up the ball and fulfill its responsibility. He also plans to involve the Housing and Justice Ministries along with the gas company. He is calling on the Housing Ministry to compel Jerusalem City Hall to give a monthly rent subsidy to the families until they can return home and is asking the Infrastructure Ministry to step in an assume the role of a regulator and formulate a plan and system that will regulate the nation’s gas companies, pointing out today the industry is run irresponsibly with little or no oversight.

Maklev says that amid a realization the bureaucracy is what it is, Jerusalem City Hall must allocate money ahead of receiving the official approval from the various agencies for the families are suffering.

It is added that during a meeting of Amsellem’s committee during the summer, he requested forming an inter-ministerial committee to address the matter of returning the families to their apartments. Housing Minister Yoav Gallant requested 60 days to study the matter after which he promises to present the government’s plan in the Gilo matter.

Jerusalem City Engineer Shlomo Eshkol told the committee the city’s Moriah Company is responsible to repair the apartments. Ofir Ayoubi, who heads the Gilo ‘minhelet’ local government estimates the cost of repairs will be NIS 7 million. He explains from time-to-time there is public pressure and the politicians awaken but today, approaching two years since the blast, the residents are still homeless.

Ayoubi adds the gas company, Super Gas, is will to pay NIS 4.5 million so the most of the work is already funded. He concludes that once the money is found the building can be returned to a livable state in ten months.