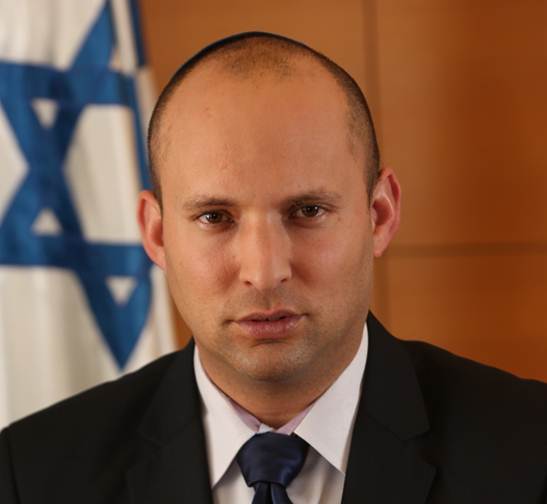 Bayit Yehudi party leader Naftali Bennett on Wednesday, the eve of 21 Kislev, submitted his resignation as a cabinet member to the cabinet secretary. In his shortly worded letter, Bennett writes “I resign from the government in line with paragraph 22a of the Basic Law and request to resign as Minister of Education and Minister of Diaspora Affairs”.

“In line with paragraph 42c of the Basic Law, following my resignation from the cabinet I will resume serving as a Member of Knesset.

His resignation follows the resignation earlier in the week of Bayit Yehudi MK Yinon Magal, who was compelled to resign amid an investigation into allegations of harassment made against him by a woman in a former place of employment. He would have been replaced in Knesset by former Bayit Yehudi MK Avi Wortzman, but Wortzman stepped aside to permit Bennett to resign. Actually, Wortzman was sworn in on Thursday at 14:00, and will serve as a MK for 32 [actually longer because of Shabbos] hours, until Bennett’s resignation goes into effect. Once he is no longer a cabinet minister, Bennett will automatically resume being a MK.

Bennett is no longer a MK because he resigned to permit Shuli Muallem to return to Knesset as part of the implementation of the so-called Norwegian Law. After becoming a MK once again, he will then return to his former cabinet posts as Minister of Education and Minister of Diaspora Affairs.

What is interesting in the maneuver to retake his MK status is that in accordance to the law, if a cabinet minister resigns, his deputy minister is automatically out, in this case, Deputy Minister of Education Meir Porush. He too is expected to resume his deputy cabinet post when Bennett returns.