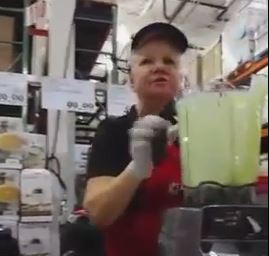 Social media was abuzz on Tuesday afternoon, as a video of a Costco employee going on an anti-semitic rant was going viral. The video surfaced on the Internet in the past 24 hours, and may have been at the Costco store in the San Francisco Bay Area.

On the video-hosting website LiveLeak, the following was written along with the video:

This offended shopper states, “I struck up a conversation with a Jewish guy in Costco in front of the Vitamox Blender Demonstration, when an employee interrupted to tell us that Jews need to go back where they came from. I asked her how that would be possible after what happened in WWII. She responded that Hitler never did anything wrong to the Jews and that they brought it on themselves.”

The Costco employee said “Jews do not belong in Israel. It’s a Palestinian Country. They should go back to where they started.”

When asked “where the Jews started”, the women replied “Europe”.

It is interesting to note, that she is not the first female anti-semite to say that Jews should “go back to where they came from – Europe”. The last one to say that was the world famous Jew-hating white house reporter Helen Thomas. The 92-year-old Thomas died in 2013 just three years after making her outrageous remarks.

Thomas was in good company, after Hamas issued a statement praising her remarks.

Three days after her remarks were publicized, she was forced to retire.