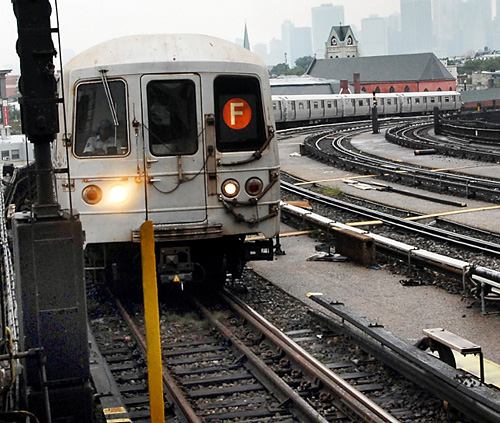 Councilman David G. Greenfield is calling on the new president of New York City Transit, Veronique Hakim, to yet again bring F express service to South Brooklyn. An F express would be crucial for commuters from Midwood, Boro Park, Bensonhurst and Gravesend, whose travel can take upwards of an hour to midtown. An express train would shorten these commutes considerably. Greenfield, and other neighboring elected officials, have written countless letters to the MTA requesting the long promised release of the F train express study and for express service to be restored.

“Tax payers in my District deserve fair and equitable access to transportation. I receive regular complaints from constituents who want that the F express to be restored. It is ridiculous that it has taken years for the MTA to release a study about the F train–that is why I am calling on the MTA to release the F train study immediately and take my constituents’ needs seriously,” said Councilman Greenfield.

“I’ve been riding the F train for the last 40 years. Express service once existed on this line, and it’s about time to bring it back. The demand is there; the service should be as well,” said State Senator Felder.

“Southern Brooklyn deserves its fair share. Constituents frequently report jam-packed platforms, overcrowded subway cars, and longer and longer commute times on the F train. The middle track is still there. The time is right to bring back express service to the F line. I support Council Member David Greenfield in calling on NYCT to bring back this much needed service that affects so many of our working families. We matter, too,” said Council Member Mark Treyger.

“After being promised the report numerous times, NYC Transit has yet to release it. The commuters of our district deserve to know the results of this study and we call upon NYC Transit to publicize it without any further delay,” said Barry Spitzer, District Manager of Community Board 12.

Councilman Greenfield has been a long advocate for more funding for the MTA. Despite Mayor Bill de Blasio and Governor Andrew Cuomo’s agreement of a $26.1 billion for MTA capital programs, it excluded many projects in South Brooklyn. In 2012, the G train expanded to Church Avenue leading to delays for F trains, especially at Church
Ave. Greenfield will continue to working closely with MTA officials to improve service along the entire line.