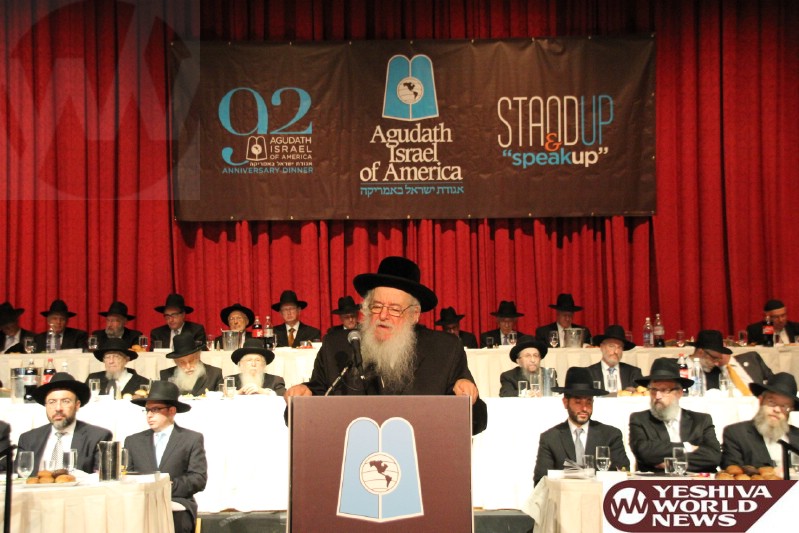 The Hamodia Newspaper has published an editorial along with a statement by the Novominsker Rebbe Shlita condemning the comments made by Rabbi Yosef Mizrachi, who is a well-known Kiruv Rabbi, which were published by YWN last week.

The statement by the Novominsker Rebbe reads:

“I condemn in the strongest terms possible the outrageous claim that fewer than a million halachic Jews were killed in the Holocaust. This claim is demonstrably false, profoundly offensive and extremely hurtful. It is an affront to the Six Million Kedoshim, precious, holy, Jewish souls whose lives were snuffed out by the sonei Yisroel. Minimizing the degree of the terrible destruction of Churban Europa, in a most morally irresponsible manner, does a grave disservice to truth, and only gives enemies of Klal Yisrael ammunition for their lies.”

Last week, YWN published an op-ed calling on Rabbi Mizrachi to retract and apologize for his comments.

Three days later, after the story was already viral and reported around the globe, Rabbi Mizrachi wrote YWN an email in which he apologized.

Many people have refused to accept Rabbi Mizrachi’s apology, as the damage caused by these comments is simply unimaginable. Holocaust-deniers have already used his video and comments on their neo-Nazi websites as “proof” to their pack of lies that the Holocaust is a “myth” created by the Jews.

One such person refusing to accept an apology was a well-known Holocaust survivor, Dr. Moshe Katz, who agreed to go on camera and deliver a message to Rabbi Mizrachi.

The response was shocking.

Hate-mail poured into YWN cursing out this Holocaust survivor for the “Chutzpah” that he had for making his statement against this Rabbi. Dozens of letters from alleged followers of Rabbi Mizrachi sent threatening letters to YWN.

It should be mentioned that Dr. Moshe Katz is a noted author and lecturer about the holocaust. He is the author of the well-received holocaust book, “Nine Out of Ten.” He has lectured at hundreds of Yeshivos, shuls and schools about the holocaust. Dr. Katz was also one of the founding members of several Yeshivos and schools including Yeshiva of Southshore, Yeshivas Sh’or Yoshiv, Yeshiva Darchei Torah, and Torah Academy for Girls. He is a pillar of the survivors of the holocaust.

Will the same defenders of Rabbi Mizrachi who had the audacity to take issue with Dr. Moshe Katz now have the Chutzpah to “curse out” the Novominsker rebbe Shlita?!

Furthermore, hate mail accused YWN of promoting the story for “ratings” and having an “agenda against Rabbi Mizrach”. In fact, Rabbi Mizrachi was on the radio on Tuesday night discussing this. He along with the radio host repeated this claim multiple times.

Nothing could be further from the truth.

If YWN had an agenda against this Rabbi, we would not have hesitated until now to publish the countless videos available on YouTube which have many disturbing insults and statements of disrespect and insensitivity toward others.

There is one critic who attacked him and his response to her is that “She will get the biggest Auschwitz.  Auschwitz is a picnic, she is going to be there for eternity.  She will never come out of there.. Korach all the people who were with him –died with him.. She’s much worse than Hitler.”  This can be seen HERE at at 1:20.

There is another video in which he attacks and labels secular women outside of the Nazi gas chambers about to be gassed as “immodest women”. One leading American Gadol who spoke with YWN on Wednesday wondered “how can Mizrachi possibly know which woman was religious and who was secular? Did he know some of the people being led to the gas chambers? Are there faces in photos that he recognized? They all looked alike with shaved heads”.

Another video lays the blame of the death of the Sassoon children on women’s lack of modesty.  Rabbi Mizrachi has stated that autistic children were sinners in past lives.  He has further asserted that blind children are being punished for watching pornography in previous lives. He also has some racial remarks about African American’s, as well as comments about why people have Autism or Down’s Syndrome.

No. This wasn’t about going after a Rabbi or stirring up controversy whatsoever.

Interestingly, Rabbi Mizrachi claims that his remarks are from four years ago. The lecture was posted on Youtube in January of 2013. But the video of the lecture was posted on Rabbi Mizrachi’s Israeli Facebook site in September of 2015, not 35 months ago, but 4 months ago.  The fact that it was uploaded by his organization less than 4 months ago is noteworthy. It is also significant that there have been over 25,000 views of it on Facebook in these past few months.

His apology claims that he was misquoted.  What follows, however, is an exact transcript.  There are also no jump cuts or other indications of any editing.

The full video can be found HERE (the section under discussion is at 35:05):

But the truth, I am telling you, is that not even one million Jews were killed.

For example, according to the rules of secular Jews, this Howard Stern – this disgusting and repulsive impure individual – he is a Jew. But, in reality, his mother is not Jewish. So he is a complete non-Jew in heaven.

According to Jewish law he is nothing – he is not considered part of the Jewish people; cannot marry a Jewess.   Who is he? The announcer on the radio.

There are a lot of Bukharian here in Queens that go around with a magen david. They had a Bar Mitzvah and they come to synagogue sometimes, and they are total Gentiles.

That’s how it was in Europe – 80% of the Jewish people were assimilated and intermarried.  Many generations before the Holocaust from the time of Hertzl who intended to Christianize the Jews as he says in his book, “The Jewish State” in a letter to the Pope, “Give me time and I will convert all the Jews to Catholicism and this way we will prevent anti-semitism and they will no longer be a problem.”

That’s what is written in his book, “Altneuland” and you can open it up and check it.

Herzl plan to convert all Jews to Christianity 120 years before hand.

After that, from then until the Holocaust there is another 50 years. Every day, every hour, the Jews intermarried with non Jews.

Now, since many of them live like Jews, not necessarily religious, but they kept Passover like we do in Israel. They celebrate using electricity and cars and trains.  They celebrated a little bit so what happened? Hitler took everyone who had even a quarter of Jewish ancestry. If your grandfather from your father’s side was Jewish and the rest were non Jews? – To the gas chambers.  They also put in the wives of Jews that were entirely non Jewish. If she hid him or they were hidden by non Jews, if they caught them, they killed them also.

A lot of non Jews were mashed into the account.  But in truth, how many Jews really were killed? In my humble opinion, not even a million.  Because if you look at the percent of assimilation that was in Europe, which already reach 80%, it is reasonable to assume that 80% of the six million were non Jews. So if you do the estimate, we’re talking only about the number of those that were claimed to be Jews.”

As can be seen, the claim that the video was taken out of context or was edited, is simply not true. Rabbi Mizrachi needs to really and truly apologize to the victims of the holocaust and to the survivors.  He needs to clean up his act.  He needs to stop the disrespect and the insults.