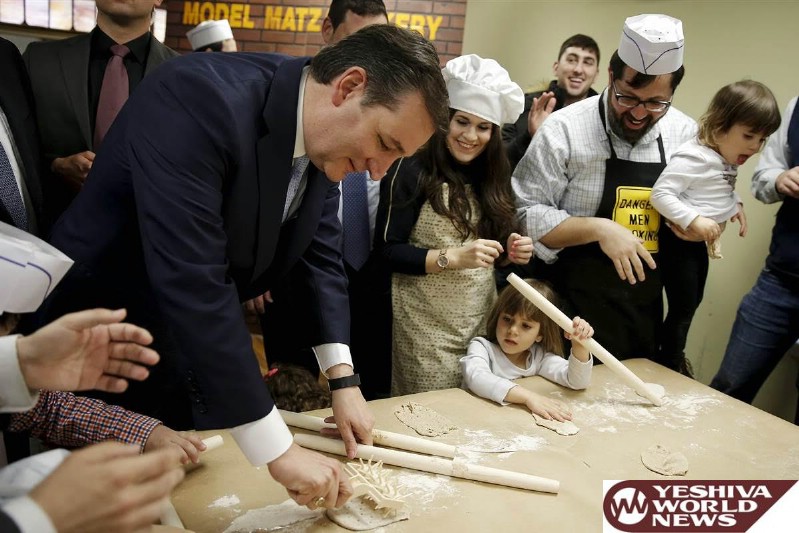 New York is about to become a battleground in one of the most important presidential primaries we have had in decades. Before New Yorkers head to the polls, I want to tell you about the person I have worked with closely for the past two years, Senator Ted Cruz.  He is not just my boss, but has become my mentor and my friend. We have traveled the country together; I have seen him in good times and bad; we have worked side by side on some of the biggest issues facing America and the world. I have watched him speak in shuls in Los Angeles, Miami, and New York; spend Pesach in Texas and California; listen to the shofar, bake matzah, read the Purim Megillah and light the Chanukah menorah.

I can tell you that there is no greater friend of the Jewish people, and of Israel.

We started together in the summer of 2014, a very bitter and difficult summer, with a war raging against Hamas in Gaza.  Three innocent teenagers were kidnapped in the West Bank.  Senator Cruz took to the Senate floor and spoke passionately about the 3 boys – Naftali Frenkel, Gilad Shaer, and Eyal Yifrah H”YD – in order to humanize them in the eyes of the world. He talked about what they were like as people, their passions, and their hobbies; and called upon Hamas to release them immediately.  When they were subsequently found murdered, the Senator sponsored legislation to offer a $5,000,000 reward for information leading to the discovery of the killers.

A few weeks later, a Hamas rocket landed a mile from Ben Gurion airport and the FAA banned all commercial flights into Israel. Senator Cruz again took to the Senate floor and demanded to know why the FAA had launched what amounted to an economic boycott of Israel while it was fighting a war in Gaza.  He questioned why the ban coincided with Secretary of State John Kerry’s arrival in Israel to try and force a ceasefire; and asked why the FAA banned flights into Israel, while allowing flights into Pakistan, Afghanistan, Yemen, and much of Ukraine, where a commercial airliner had recently been shot out of the sky. And it was not just words: the Senator announced he would put a hold on all State Department appointees until his questions were answered.

The very next day the FAA lifted the flight ban.

Then in September, Senator Cruz was scheduled to speak at a dinner in

Washington by a group called “In Defense of Christians”, whose goal was to bring attention to the persecution of Christians in the Middle East by radical Islamic terrorists.  As an evangelical Christian, this was an issue that was of deep concern to the Senator.  However, on the morning of his speech, we got word that there were pro-Hezbollah speakers at the conference and that many in the crowd seemed anti-Israel.  All day our office struggled with the decision of whether or not the Senator should cancel his speech.  Finally, the Senator said: “I’m going to go and speak the truth, no matter the consequences.”

As he begun his remarks, he said:

“Christians have no greater ally then the Jewish State. Those who hate Israel, hate America; and those who hate Jews, hate Christians.”

At that point, there were boos and catcalls from the crowd.  The Senator continued:

The booing got worse, and I actually became afraid for the Senator’s personal safety in the hostile crowd.

The Senator then said:

And with that, he walked off the stage.

Not a day goes by that Senator Cruz does not think about the Jewish people and Israel. Whether it is putting together a coalition of evangelicals, national security experts, and conservative tea party groups to oppose the Iran deal; or working with New York Senator Kristen Gillibrand to condemn Hamas for acts of terror; or fighting against the BDS movement, discriminatory labeling of products from the West Bank and global anti-Semitism, the Jewish people have a true friend and champion in Senator Cruz.

People often ask me why the Senator focuses so much on these issues. I believe that he relates to the struggles and hopes of the Jewish people because his father too fled oppression in a foreign country and came to America seeking freedom and opportunity.  While he would never compare what his father went through to what the Jews suffered in the Holocaust, he always quotes his father

as saying: “When I fled Cuba, at least we had somewhere to go.  If we lose America, where do we go?” The Senator believes that Israel, like America, is an important beacon for hope and freedom.

On a personal level, Ted follows the commandment of “Tzedek Tzedek Tirdof”-“Justice, justice you shall pursue”– he has no patience for lies or falsehood of any kind. I have never seen him lose his temper; I have seen the respect and derech eretz with which he treats everyone around him – whether it is his wife and daughters, his staff, or a taxi driver on the street.

His respect for Yiddishkeit enables me to thrive as an Orthodox Jew on his staff, and he makes a personal effort to ensure I get home in time for Shabbos and have kosher food wherever we travel. Often we will be on a train or in an airport together late at night after a long day on the road, and I will pull out my Gemarah to study Daf Yomi, and he never fails to ask me what that day’s Daf is about.

In 1992, students asked Telshe Rosh Yeshiva Rav Chaim Stein zt”l, whether Jews should vote for George Bush, a morally upstanding person who some thought had been tough on Israel; or Bill Clinton, who was perceived to be warmer to the Jewish people, but had personal moral scandals.  Rav Stein replied that if someone is personally corrupt, then no matter what they said about Israel, in the end they would not be good for the Jewish people.

And so it came to pass.  Bill Clinton “loved” Israel so much that he forced them into peace agreements with the Arabs that led to years of bloodshed.  Israel does not have a good history with presidents who are eager to “make a deal.”

Ted is a model of mentshlechkeit. I have three young children, and I think a lot about what kind of country I want them to grow up in; who I want them to look up to as President of the United States during their most impressionable years.

“Seek the prosperity of the city to which you are exiled, and pray for it to Hashem. For if it prospers, you will prosper.”

America is at a crossroads. Like in 1980, when Americans rejected the failed foreign and domestic policies of Jimmy Carter, and elected Ronald Reagan, we have an opportunity in this

election to restore America’s leadership in the world, grow our economy and create jobs, and return our country to constitutional principles, including religious liberty.

For the first time in many years, New York is a battleground in the Republican primary. The Jewish community can play a significant role

in electing Ted as the next President of the United States.

I am not a rabbinic authority and am still working on semicha, but I believe with all my heart that it is a great and important mitzvah for each and every Jew who can vote in the Republican primary to get to the polls on Tuesday and vote for the next President of the United States, and my friend, Ted Cruz.

Nick Muzin, M.D., J.D., is the Senior Advisor to Senator Ted Cruz. A graduate of Ner Israel Yeshiva of Toronto and the Talmudical Yeshiva of Philadelphia, he has degrees from Yeshiva University, the Albert Einstein College of Medicine and Yale Law School. He lives in Silver Spring, Maryland with his three children.