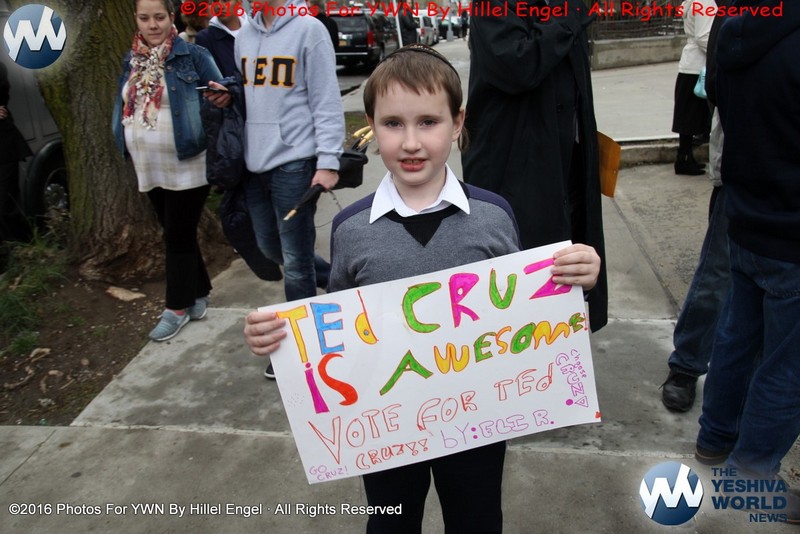 I read Nick Muzin’s heartfelt piece about his friend and boss Senator Ted Cruz and Jews and decided to echo it with one of my own experiences with Cruz – from before he was a presidential candidate, or even a senator.

For many years off and on I attended the first day or two of CPAC – the American Conservative Union’s annual massive gathering conservatives – in Washington. It started midweek and ran through Saturday night, but, of course, I would have to leave midway to get back to New York before Shabbos.

In 2012, hearing of a group that was bringing a number of Jewish college students to CPAC, I called the leaders and told them that if they would urge the kids to attend, I would organize a private Shabbos program onsite – meals and davening and leining. “[email protected]” was an instant success and Shabbat meal registration is now an option on CPAC’s official program.

That first CPAC Shabbos was revelatory. We hoped for 20-25 people, but ended up with well over 100. (Fortunately, a magnificent spread for the entire Shabbos was supplied by my friend Yanky Brach, who insisted on providing lavish, simcha-worthy food for even more people than that, because “You never know – and you don’t want to turn anybody away from Shabbos!”.) It was all word of mouth. Our suite was tucked away far from the main action – but the word kept spreading and people kept coming. I remember a sublime moment when a bunch of college kids were hustling over before my wife lit candles to help us set up the room – their arrival was preceded by an excited “Shabbos is coming” song echoing down the halls of CPAC.

I remember the guy dressed like he was in a rock band sitting quietly and taking it all in. We were going around the room and introducing ourselves and when it was his turn he stood up and said “This is my first Shabbos meal since my grandfather died when I was seven. I’m 22 now and I’m sitting here thinking of how much I missed. I am going to put Shabbos back in my life.” And, as it turns out, he was in a rock band – a new band playing songs that promote patriotism.

Talk show hosts, campaign operatives, policy wonks, Hill staffers and journalists who otherwise would have had no Shabbos spent hour after hour enjoying a real heimishe Shabbos with divrei Torah, zmiros and, endless, amazing food. Throughout Friday night and all day Shabbos politicians and pundits came by, drank a l’chaim, said a few words, then headed back to hobnob and socialize at CPAC.

But for me, the standout visitor that Shabbos was a relative unknown. A candidate for the US Senate – outsider and Tea Party darling Ted Cruz.

Mr. Cruz came and sat modestly towards the foot of the long table. But unlike the other politicians, his wasn’t a “drop-by”. He came before Kabbolas Shabbos and he stayed for the meal and he was still there almost three hours later, after most of the crowd had gone out to enjoy the more political offerings of CPAC.

At that point, according to the schedule, I was to give a 45 minute shiur on the parsha, just in case anyone wanted to stick around. There was a group of perhaps 20 or so mostly observant Jews…and this fellow Cruz. It was Shabbos Yisro and my topic was the structure of the Aseres Hadibros. Ted Cruz engaged immediately. In describing one shitah as to why the Luchos and Dibros are structured the way they are, I introduced to the otherwise almost entirely Jewish group the fact that Christians count the “10 Commandments” differently than we do and, in fact, Catholics and Protestants differ amongst themselves. Cruz already knew. “My father ‘s a pastor and I’ve argued 10 Commandments cases,” he explained. “I love this.” He was totally knowledgeable, engaged and at home and his participation turned the session into an animated, vibrant, informed discussion that went on nearly two hours.

There were many places a candidate for Senate from Texas should have been that night if his first priority was political ambition. But Ted Cruz preferred to spend his time with us, with Jews enjoying Shabbos.

Since then, I’ve had a chance to be with Senator Cruz at a number of non-political events, for example a lunch visit of Jewish Yale students to his office organized by an alumni group to which Nick and I both belong. The Senator was actually scheduled for a midday “drop-by” this time, no more. But his connection to the politically diverse students was real. He wanted to talk about Israel, then under global onslaught for responding to the terror from Gaza, and about BDS and anti-Semitism and what it feels like to be Jewish today on a liberal college campus. He shared with us his concern over the normalization and intensification of international anti-Semitism and the impact of the widespread perception of America distancing itself from Israel under the Obama administration. Cruz pushed off other meetings and stayed for lunch and beyond. Republican, Democrat and Independent, the young impressionable Jewish students were deeply impacted by the senator from Texas’ knowledge, insight, empathy and passion.

The usual rap that the Left gives conservative candidates is that they are unintelligent. It doesn’t matter if they have academic and professional accomplishments that far outstrip their Democratic opponents. That spin simply wasn’t available with Ted Cruz, whom liberal Jewish icon Alan Dershowitz has publicly proclaimed to be “off-the-charts brilliant.”  So instead they spun as a negative what should have been a positive – Cruz’ willingness to stand on principle and not surrender to DC politics as usual. The knock against Cruz now is that he is “unlikeable” because he isn’t popular with the establishment. Nonsense. In the larger social settings I’ve seen and in private one-on-ones, I’ve never found Cruz to be anything other than warm, open, intimate and inspiring. That many in Washington resent his principled service is a badge of honor. As Winston Churchill famously observed – and as Jews know very well – “You have enemies? Good. That means you’ve stood up for something, sometime in your life.”

Politics is a rough business and it takes guts to stand up for what is right. The Ted Cruz I’ve seen is driven by idealism and principle – above all, a fierce love for America as an exceptional country whose uniqueness derives from its moral leadership. It is equally clear that for Ted Cruz the wellbeing of Jews is a deeply personal commitment and that in the face of rising anti-Semitism, America’s moral leadership only exists inasmuch as it is committed to protecting Jews in Israel and around the world. In private as in public, Ted Cruz is a true Oheiv Yisroel and the kind of unyielding moral warrior we need in the White House.

Yehoshua (Jeff) Ballabon is ceo of B2 Strategic (www.b2strategic.com), chairman of the Iron Dome Alliance (www.IronDomeAlliance.com) and a senior fellow at the American Conservative Union’s Center for Statesmanship and Diplomacy (http://acufoundation.conservative.org/policy-centers/).