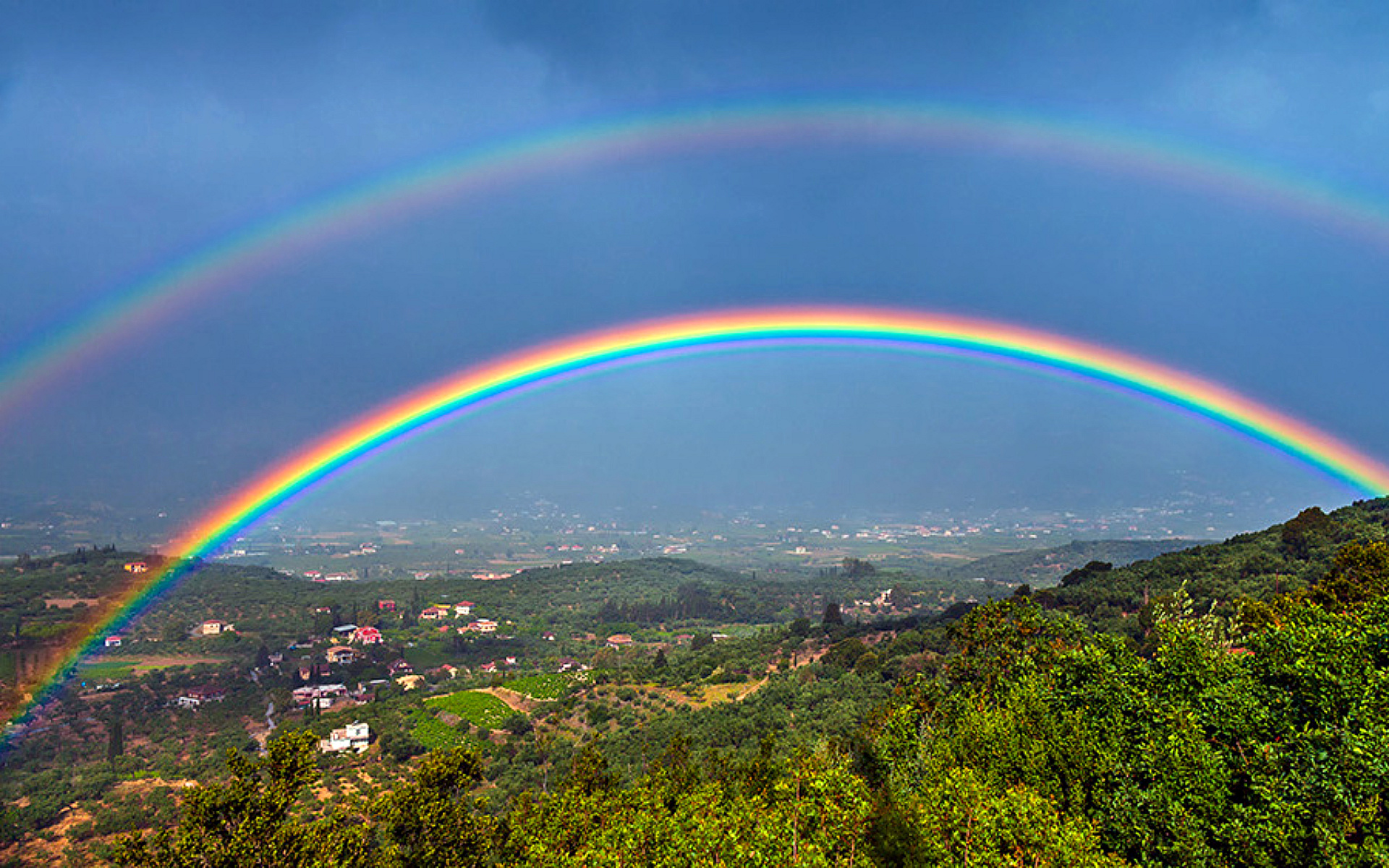 There exists differing ways of viewing the rainbow. From purely a scientific perspective, a rainbow is merely a meteorological phenomenon. It is an arc of light separated into the bands of the color spectrum which is caused by the reflection, refraction and dispersion of that light in water droplets.

Not so, in our world.

We ascribe great cosmological significance to the rainbow. Indeed, the Torah (Bereishis 912-16) devotes four psukim in Bereishis to the rainbow. These psukim explain that that the rainbow is a promise between Hashem and mankind never again to destroy the world through a flood.

It is clearly, a very important promise. This can be seen from the following two facts: The Mishna (Avos 5:6) lists the rainbow among the ten items that Hashem had created at the end of Maaseh Bereishis – during Bain HaShmashos. The Gemorah (Brachos 59a) further tells us that we recite a bracha whenever we see this sign of that promise.

The bracha is, “Blessed are You, Hashem, King of the universe, who remembers the covenant, and is faithful to His covenant, and keeps to His promise.” It is codified in the Shulchan Aruch (Orech Chaim 229:1). The triple phrasing in how the bracha is structured is unique among the brachos as well – we do not find such a three-fold blessing among the other brachos that we recite.

Why the triple phrasing? Perhaps the answer lies in the words of Rashi on the psukim in Bereishis (9:14). He explains that the rainbow recalls the Divine anger and Hashem’s desire to destroy the world based upon our actions. The triple phrasing could be a supplication to Hashem – “Please Hashem, remember Your promise not to destroy us” – recited three times to underscore the direness of the situation.

DOES ONE NEED TO SEE THE ENTIRE RAINBOW?

The language of the Shulchan Aruch is that one who sees a keshes should recite the blessing. The Chofetz Chaim in his Biur Halacha (“haro’eh”) remains unresolved as to whether or not one must see the entire bow of rainbow in order to recite the bracha, or whether simply seeing some of it is enough. The Sefer HaBris (54a) posed the same question. There are Achronim that permit it, and on their account Rav Ovadiah Yoseph zt”l (Chazon Ovadiah Hilchos Brachos page 473) ruled that if one does make a bracha on it even seeing only a portion of the arc of the rainbow he has whom to rely upon.

On the other hand, Rav Moshe Shternbuch Shlita (Teshuvos V’hanhagos Vol. III 76:6) rules that since we are uncertain as to the halacha the principle of safaik brachos l’hakel is invoked and we do not recite the blessing.

Although they are rare, a moonbow is a rainbow produced by light reflected off the surface of the moon as opposed to the sun. It refracts off of moisture-laden clouds in the atmosphere. Moonbows are very faint, compared to regular rainbows, due to the smaller amount of light reflected from the surface of the moon. They are always in the opposite part of the sky from the moon. They are pretty much only visible near or on full moons.

The Shla (Parshas Noach page 30) writes, citing the Ramah, that rainbows do not exist at night. This is also expressed by Tosfos (RH 24a) and the Roke’ach (end of Parshas Shlach). There seem to be two ways to understand this. It could be a] that they are of the position that a moonbow does not have the halachic status of a rainbow or it could be b] that the moonbow was not seen in the geographic position of where these Meforshim lived. The difference would be as to whether to recite a blessing on a genuine moonbow that one sees.

The Maharsham (in his responsum Vol. II #124) rules that a blessing is cited on a moonbow, and in fact the Belzer Rebbe, Rav Yehoshua Rokeach (1855-1894) did recite it.

The Tikunei Zohar (Tikun 18 page 36b) states that there are klipot that surround the rainbow of a tempestuous wind and a large cloud. These cause the true deeper colors of the rainbow to be obscured, and if these were actually seen – then Moshiach would arrive immediately.

There is also great debate as to the actual wording of the bracha. Is there a vov before the word ne’eman? We rule that there is, but the BaHaG, the Vilna Gaon, and others have a different girsah. There are differing versions in the text of the Rambam, although the majority have it with a vov.

The Ben Ish Chai (Parshas Aikev #17) cites the Yaaros Dvash that there are two types of rainbows one that is created next to mist filled clouds and sunlight and another which is bluish in hue (T’chailes) and it is only that bluish one which recalls destruction (kil’yon – related to tchailes). The Ben Ish Chai recommends that according to this view when one sees a regular rainbow one should recite the blessing without shaim u’Malchus.

LOOKING AT A RAINBOW

This topic is one of the most controversial aspects of rainbows in halacha. To what extent are we permitted to look at a rainbow?

The Gemorah (Chagigah 16a) tells us that one who is mistakel [gazes] at a rainbow, it is worthy that he had not come into the world, for he cares not about the honor of his Creator, and that his eyes will become dimmed.

Rav Dovid Avudraham was asked the question as to how one can recite a blessing on a rainbow when we should not look at it. He responds, quoting the Rosh, that it is permitted to look at it, but not gaze at it in depth – that is for a prolonged period of time. The Orchos Chaim (Brachos 56) cites the same Rosh, and this seems to be the basis for the ruling of the Shulchan Aruch not to gaze at it for a long period of time.

What’s the reason for not looking at it at length? The Tosfos R”id explains that the prohibition is symbolic. Just as it is well nigh impossible to differentiate where each of the colors begin and end in a rainbow, we are enjoined to not contemplate the nature of Hashem and the prohibition of looking deeply at the rainbow reminds us of this.

The Mishna Brurah (229:1) cites the Chayei Odom (Klal 63:4) that it is not worthwhile to tell a friend about a rainbow because it is considered like Motzi Dibah – saying something negative or bad. This is based on the Gemorah in Psachim (3b) and cited in Shulchan Aruch (YD 402:12) that one should avoid being the harbinger of bad news. [Indeed, Rabbi Chaim Polskin z”l and my father-in-law Rabbi Yaakov Hirsch z”l – would inform each other of levayos that the other had to attend, without telling who it was that had passed away, based upon this halacha.] Rav Yosef Chaim Sonenfeld zt”l (Salmas Chaim 142) and the Kaf haChaim express the same view. This is based upon the idea expressed earlier that the rainbow’s appearance is a negative sign – that mankind has done something worthy of destruction.

Rav Dovid Yosef Shlita (Halacha Brurah Vol. XI page 485) quotes the Sefer Bris Kehuna (Letter Kuf os 3) who cites the Chayei Odom but argues and says that on the contrary, we are happy and give thanks and blessing to Hashem for not destroying His world and that one should tell friends so that they pay attention and do Teshuvah. He quotes his father, Rav Ovadiah zt”l who agrees to the Sefer Bris Kehuna.

LOCATION OF THE RAINBOW

The blessing is recited regardless as to whether it is still raining or not. However, it should only be recited on a type of rainbow that is seen on account of clouds, and not on one seen on water or oil.
The blessing is recited every time that one sees it, provided that it is a different rainbow – otherwise one just recites the bracha on that rainbow once that day. It is thus different than the type of blessing that is recited on natural marvels, where the halacha is that one recites it only when one hasn’t seen it in thirty days.

PICTURES OF A RAINBOW

What about taking a picture of a rainbow, or using a photograph of a rainbow that someone else took? Does that carry the same problem as viewing a rainbow itself?

Rav Chaim Palagi (Ruach Chaim 429:2) poses the question about gazing at a reflection of a rainbow, and recommends not to do so, although no blessing is recited on a reflection. This author would like to suggest that by virtue of the fact that a] Rav Palagi is uncertain about a reflection, and that b] many of the reasons for the prohibition in the meforshim do not apply to a photograph and that c] there are a number of other factors, we can combine all these as snifin lehakel to allow use of photographs of rainbows. In addition, if one quickly takes a photo of it without gazing, it seems that it would be permitted by the Shulchan Aruch – in other words it seems that the leniency is not just for the purPose of reciting a blessing.