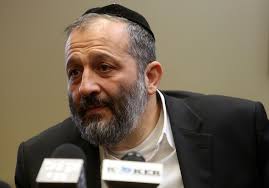 Shas party leader Minister Aryeh Deri on erev Shabbos spoke at length with radio personality Benny Rabinovich, on Kol Chai Radio. During the half hour discussion many current events topics were addressed, including the advances by the Reform Movement at the Kosel, particularly the mixed-gender mincha a day earlier.

Rabinovich, a prominent chareidi journalist, blasted Prime Minister Binyamin Netanyahu, blaming him for being part of the mechanism that permitted significant advances for the Reform Movement.

Deri was quick to correct his host, telling Rabinovich that PM Netanyahu is compelled to concern himself with the Supreme Court no less than the chareidi parties and “there is a reasonable possibility the High Court will order a third prayer area at the Kosel, one for mixed-gender services”.

Deri highlighted that the Prime Minister is backing the chareidim and the battle to maintain the religious status quo but he is compelled to do so amid the realization the matter may be decided by the court.

Prime Minister Netanyahu issued the following statement regarding the controversy at the Kosel. “As I have said many times before, the unity of the Jewish people is a source of our strength and one of the values closest to my heart. As we continue to work towards a solution that will allow all Jews to feel at home at the Kosel, there are those who would prefer to divide our people and even to say that other Jews are wicked or aren’t Jews at all. We all must unequivocally reject these inappropriate words and deeds, which run counter to the basic spirit of the State of Israel.”