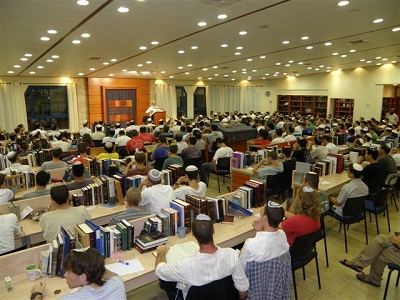 Before one reads on, one must realize in the eyes of the secularists and leftists in Israel, ‘democracy’ is understood to be having tolerance for any hashkafa that does not contradict a left-wing anti-Torah agenda. Hence, if one does not identify with the latter, one is perceived as a ‘threat to democratic fibers of the State of Israel’.

Last week the shouts emanating from the leftist Meretz party were to void the appointment of incoming IDF Chief Rabbi Eyal Karim for having dared to “permit attacking women in a time of war” as the amei haaretz of that party interpreted a Torah essay by Rabbi Karim relating to ‘Eishes Yifas Toar’. They also blasted Rabbi Karim for daring to speak out against a to’eva lifestyle R”L.

The anti-Torah agenda of Meretz has found its new target for this week, one of the heads of the mechina yeshiva in Yishuv Eli, Yeshivat Bnei David. Meretz leader MK Zahava Gal-On is calling on the Defense Ministry and other state agencies to immediately cut all funding to Bnei David as one of its founders, Rabbi Yigal Levinstein, dared to speak out against Chief Education Officer Brigadier-General Avner Paz-Tzuk and the latter’s vehemently anti-Torah agenda which is being infused throughout the military. Levinstein explained how Paz-Tzuk continues working to remove authority from the IDF Rabbinate, placing this authority in his trusting secular anti-Torah lifestyle hands.

Ironically, just this past Independence Day, a few short weeks ago, the co-founder of Bnei David, Rabbi Eli Sadan, was awarded the Israel Prize for building the prestigious mechina pre-IDF institution whose talmidim today serve as the backbone of the most elite units in the IDF. However, the kipot srugot can no longer be tolerated as some of their officers dare to speak out using the “G” (G-d) work and contaminating soldiers with talk of belief in HKBH and a Torah lifestyle.

Gal-On explains “A battle is taking place and the time has come to decide which side of the battle we are on” in her reference to Rabbi Levinstein who dares to envision a Jewish moral army as opposed to Gal-On’s vision of a military that waves the flag of pluralism and embracing to’eva and any and all lifestyles chas v’sholom.

MK (Machane Tzioni) Ksenia Svetlova calls on the Defense Minister and Education Minister to act immediately in response to Levinstein’s brazen statements. In her letter she writes “Levinstein receives his salary from the Ministry of Education and the preparatory program he heads received allocated funds from the Ministry of Defense. It cannot be that he holds such a conference under your eyes, a conference to deal with the Conservative and Reform, and even worse, incite against the to’eva and calling them perverts and thus setting the stage to harm them. He implies one may harm innocent people by saying ‘a soldier cannot fight if he was not sure that he can rely upon the one at his side 100%…’ and by this he is trying to erase the IDF’s code of ethics”.

Not to be outdone by his colleagues, MK (Meretz) Ilan Gilon, who adds “It is frightening to think that the one with this dark thoughts has an influence on the IDF and anything connected to Jewish identity. Levinstein belongs to all of those wishing to see the State of Israel become a Halachic Taliban state in which women and gays are persecuted. This has no place in the IDF and on the background of his statements, and the recent statements of the incoming IDF Chief Rabbi, I suggest the Chief of Staff conduct an overhaul to determine just how these rotten stumps have planted their roots in the IDF”.