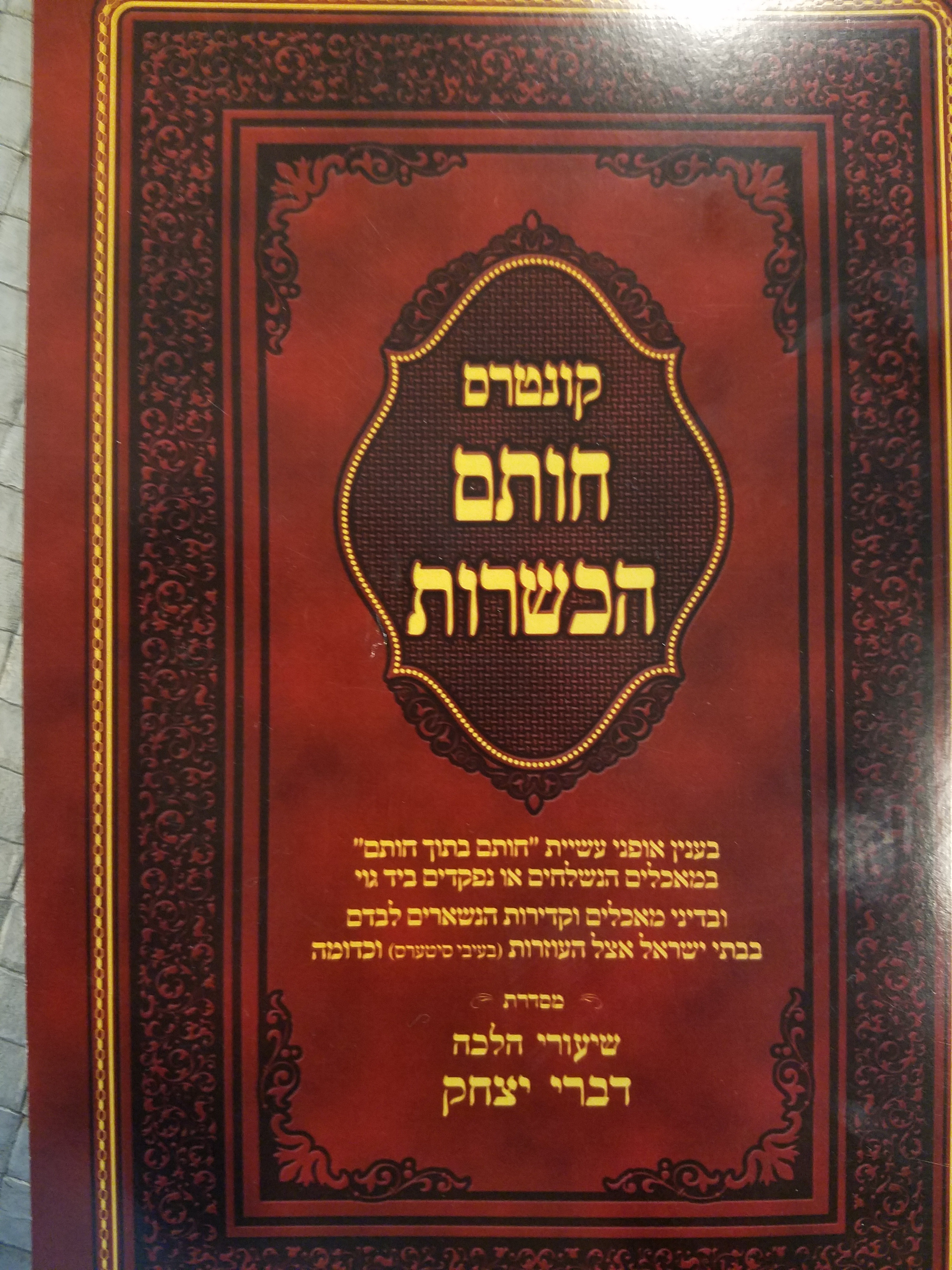 Dayan Yechezkel Roth Shlita is one of the premier Poskim in the United States, and formerly the dayan of the Satmar Rebbe zatzal, Rav Yoel Teitelbaum. Dayan Roth heads the Beis Talmud L’Hora’ah Karlsburg which has a number of illustrious dayanim, and heads of the Beis Din – among them are Rav Hershel Ausch Shlita and Rav Yitzchok Stein Shlita. Rav Stein had delivered a number of shiurm on the topic of “Kashrus seals” under the auspices of the remarkable “Irgun Shiurei Torah” organization.

Recently, the highlights of the shiur he delivered have been published in a small forty-two page pamphlet which is available at finer Seforim stores. There are 39 sections in the pamphlet. What follows is a summary of Rav Stein’s conclusions. The summary, of course, is not exhaustive.

WHY SOME ITEMS NEED TWO SEALS

In the first section Rav Stein delineates what food items need two seals and what need just one. He cites three opinions as to the nature of the distinction: The Rashba and Rambam write that items that are biblically forbidden require two signs, and Rabbinically proscribed foods only require one. Rashi writes that expensive foods require two and the cheaper ones require one and the Ran cites the Yerushalmi that it depends whether or not its prohibition is internal or on account of some outside factor. The clear conclusion of Shulchan Aruch is like the Rambam and the Rashba.

In the second section he discusses the Gemorah in Avodah Zarah (69b) which indicates that a barrel seal alone is considered as one seal. Rav Stein then quotes one of Rashi’s Rebbeim, Rav Yitzchok Ben Yehudah, who forbade it because he distinguished between the types of barrels in the times of Chazal and those in use in Germany and France.

Rav Stein, however, does not bring Rashi’s response (Responsa #161), nor Tosfos’s disagreement with Rashi’s Rebbe. The upshot of Rav Stein’s conclusion is that normative halacha is like Rav Yitzchok Ben
Yehudah, when it seems to this author that the opposite is, in fact, the case. This is not only from these two sources but from the way the meforshei Shulchan Aruch deal with this issue.

HOW MANY SEALS DOES WINE REQUIRE?

The next few sections deal with a Chosaim within a Chosaim. In section seven and eight Rav Stein cites Acharonim who disagree with the Aruch HaShulchan’s conclusion (YD 118:18) that nowadays wine only requires one seal – not two. The Tzitz Eliezer (Vol. XII #56), however, cites a number of factors where he states quite unequivocally that only one seal is required.

WHEN THE GENTILE HAS NO BENEFIT

In section twenty one, Rav Stein discusses the leniency of “when the gentile has no benefit.” He seems to conclude that it is not ideal to rely on this lechatchila. However, even if this is correct, it seems that this is only true in regard to food items that require two seals, but it is lechatchila in regard to foods that only require one seal.
In section twenty-three he discusses a lone opinion (against twenty five other

In the 39th section, Rav Stein makes some practical suggestions.

1. Ideally, one should not send food items that require a chosaim (seal) without a completely valid seal – even in a public place.

2. The notion of “He does not benefit in the switching” is not a lechatchila heter – since some Poskim were stringent – even though the overwhelming majority of Poskim are lenient.

3. Even cooked or baked items that gentiles do not generally make require a proper seal.

4. Stores and supermarkets owned or operated by gentiles require extreme care in regard to seals.

5. It is necessary for any seal that is used to be placed in such a manner that it would be apparent if the gentile had opened it. For example, words should be printed on the package where half of the letters are on the sticker while the other half are on the box or wrapper.

Rav Stein also provides six strong recommendations for those that have a housekeeper or babysitter that is either one who does not keep kosher or is aina yehudis.

2. The home should not be locked in such a manner where one who enters would be readily noticed and would give opportunity to hide non-koser food. If this is not possible then upon the person’s arrival one should make sure that no food items were brought.

3. To make some sort of an identifying feature in the meat or fish that are not sealed – for example that which is set aside for lunch or dinner.

4. Generally speaking it is a good idea to set a hard and fast rule that no outside food be brought into the house so that there will not be any questions on the pots the oven or even the microwave.

5. They should be warned not to cook or arm any tem in pots or pans because if an item is cooked in a manner that constitutes Bishul Akum – the vessels would be rendered non-kosher.

6. If post-facto cooking did occur the vessels become non-kosher even after one has waited 24 hours. In a case where the item cannot be koshered otherwise, a Rabbi should be consulted as to the leniencies available.

As a follow up to a previous article regarding the Exxon station on Route Nine in Lakewood, NJ, I have been informed that it is now under a recognized hashgacha that also has 24 hour video surveillance. Furthermore, there have been a number of situations where, in fact, the Cholov Yisroel milk in gentile establishments (that stock other milk) have been switched over – so caveat kosherus emptor.

Attention Readers: The seventh volume of Not Your Usual Halacha has just been released. The author’s books, including the Not Your Usual halacha Series, Hilchos Shabbos, Hilchos Meuzah, Hilchos Kashrus can be purchased at amazon.com