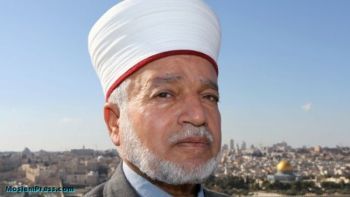 The PA (Palestinian Authority)-appointed Mufti of Jerusalem Sheikh Mohammad Hussein, on Sunday told his people that all of Jerusalem belongs to Islam. The mufti was speaking on the 47th anniversary of an arson attack against al-Aqsa Mosque which was perpetrated by Australian national Dennis Michael Rohan.

Hussein on Sunday 17 Menachem Av called on the Palestinian people to gather around the mosque, warning of ongoing Israeli efforts to cleanse Har Habayis of any Arab presence. He emphasized how history proves that all of the holy city belongs to them, citing the “sacrifices of the Palestinians” and how they will never relinquish their claim and right to al-Aqsa and their unwillingness to compromise on the Palestinian character of the city.

On August 21, 1969, Rohan set fire to the mosque. He was arrested two days later, placed on tried and found to be insane. He was hospitalized in a mental institution and in 1974, he was deported from Israel on humanitarian grounds for continued therapy near his family. He reported died in 1995.