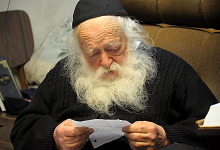 Kol Chai Radio host Betzalel Kahn reports when he and others were summoned to the home of HaGaon HaRav Chaim Kanievsky Shlita, they thought it was just to receive a bracha for Rosh Hashanah which they sought. However, when they arrived the rav’s gabboim explained Rav Kanievsky is “ill at ease” and most concerned over the situation, particularly the pain and suffering of widows and orphans.

Rav Kanievsky is calling on increased tefilos and teshuva from Am Yisrael, adding that tonight, Wednesday, 25 Elul, rabbonim will gather in his home in Bnei Brak for a special tefilla event. Gedolim from all communities are planning to join Rav Chaim Shlita in this special tefilla event including;

A special “Sefer Chaim” is expected to be signed by the Torah giants during the event, which is also connected to Kupat Ha’ir in the hope of raising funds for widows which will be distributed immediately.
(YWN – Israel Desk, Jerusalem)