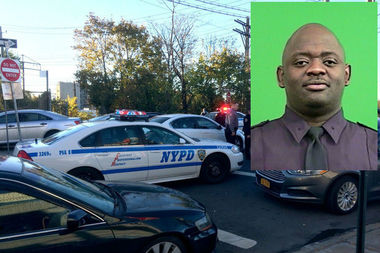 A New York City police officer injured during a gunfight with a suspect has been released from the hospital.

His partner Sgt. Paul Tuozzolo, was fatally shot in the head in the exchange of fire Friday with an armed man on a Bronx street. The encounter unfolded after the gunman, Manuel Rosales, had broken into this estranged wife’s home.

Rosales, of Brentwood, Long Island, stayed for hours before fleeing. He also was killed in the gunfire.

Authorities say Rosales had a history of 17 arrests, some related to domestic disputes. He had served time in state prison for possession of stolen property.

Tuozzolo lived on Long Island with his wife and two young children.