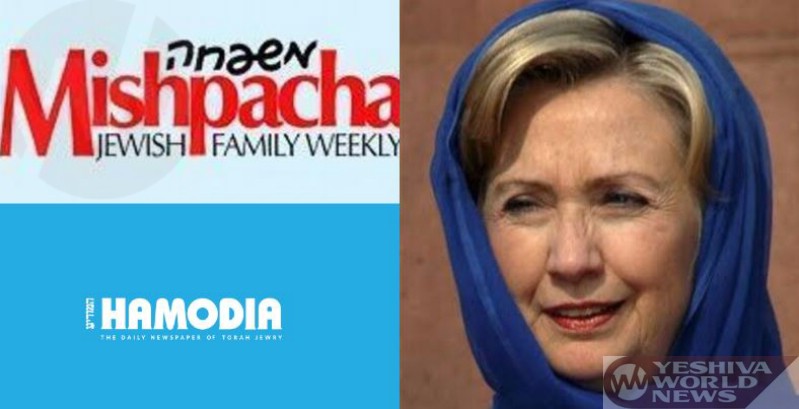 It was predictable. We all knew this would happen – it was just a matter of time.

As YWN has reported, the front cover of this week’s Mishpacha Magazine had a picture of Hillary Clinton. YWN has confirmed that this decision was made after consultation with the greatest Poskim and Gedolim in the United States.

Nonetheless, the decision was denounced by the editorship of Hamodia in Israel. Yet Hamodia was well aware that Mishpacha’s decision was checked and double-checked with the Gedolei HaPoskim. In fact, Hamodia has behind the scenes, been avidly trying to get all Charedi media publication to agree to their Chassidish opinion (the Admorim of Gur and Novaminsk — which we FULLY respect) not to publish a Hillary photo.

Apparently they are oblivious to the fact that not everyone is required to follow those Chassidim opinions. It is shocking that the Hamodia in Israel chose to attack the opinion of major Poskim – and label them as not “true Chareidim.”

Here are excerpts from their editorial that slammed Mishpacha: “True Charedi newspapers never have and never will publish pictures of women, even if they are in leadership positions. Jews have their own view of everything that happens, especially when the subject is as important as elections. In the eyes of Jews, the US is definitely a ‘kingdom of kindness’ in our days, and deserves recognition and appreciation for that. They understand that the fact that we won’t publish a picture of the Democratic candidate on the front page of haredi newspapers does not mean that we don’t support her, but rather stems from the fact we keep Jewish law,” said Hamodia.

There is a story told that when Artscroll’s biography on Rebbitzen Kanievsky a”h was about to go to print, a copy was shown to Hagaon HaRav Chaim Shlita. After browsing through the book, he turned to those around him and asked, “Why are there so many photos of me and not many of the Rebbitzen? This book is about her!”

The policy of not publishing photos of women has morphed into a policy of dangerous intolerance to those who do not adopt this Chumrah.

The weekly Flatbush Jewish Journal published a photo of Rebbitzen Pam A”H on her Yartzheit. Their decision was made following the Psak of their Rabbonim – who are among the biggest Rabbonim and Poskim in Flatbush. Sure enough, the paper was viciously attacked by some of the local Chassidish Rabbonim. The Rabbonim who have paskened for the paper have been living in Flatbush for 70 years or more. These Chassidish Rabbonim have only opened their shuls recently.

Recently, the same newspaper was attacked after publishing photos of Rebbitzen Feldman A”H of the Mirrer Yeshiva.

The intolerance has simply gone too far.

Whatever happened to respecting the opinions of others? Why must every Charedi publication follow the opinion of the Hamodia?

Additionally, one must take into consideration the ramifications of ignoring the President of the United States.

Let’s take, for example, when the iconic photo taken inside the Situation Room during the operation to capture or kill Bin Laden. That photo was airbrushed to remove then Secretary of State Hillary Clinton and published in the Satmar newspaper Di Tzeitung.

The doctored photo and story went viral. Later, WikiLeaks exposed emails that showed just how furious Hillary was at the time. Imagine her reaction as president. Not to mention the fact that altering the photograph was illegal and the cause for a serious Chillul Hashem.

Today, Sruli Besser – a contributing editor of Mishpacha responded to the HaModiah attack on Facebook. He wrote:

I’m so sorry that you don’t find us to be true chareidim. I thought hours of conversation and deliberation with real rabbanim would give us some credibility, but I guess not. I’m sorry that when we asked genuine gedolim and poskim how to proceed and followed their advice, we didn’t think to ask you what true charedi papers have always done.

I’m much sorrier that you thought it wise to make this a public issue, because the charedim (true, not true, whatever) don’t need this story in the secular media. We were barraged by requests for comment last week from major media outlets, and we respectfully fended them off because we’re not here to be spokesmen and saviors, just to do keep doing our jobs with ehrlichkeit, professionalism and dedication. It’s not about us.

I respect your right not to publish a picture of Hillary, in line with your mesorah. (I imagine that this comment appeared in Hebrew Hamodia, not English, I haven’t yet seen it. I hope it’s not in English!) It’s a holy mesorah. I enjoy Hamodia and will continue to enjoy it.

Rav Yosef Chaim Sonnenfeld was asked by a British census taker what language he spoke at home and he said Ivrit, rather than Yiddish- which of course didn’t reflect his true ideology. Talmidim asked him why he chose to answer that way and he said, ‘Voss iz tzuvishen mir uhn mein breeder, things that come between me and my brother, iz nisht di gesheft fuhn der…isn’t the concern of this Englishman.’

I’m sure you mean this l’shem shamayim and I wish you hatzlacha in your great work.” 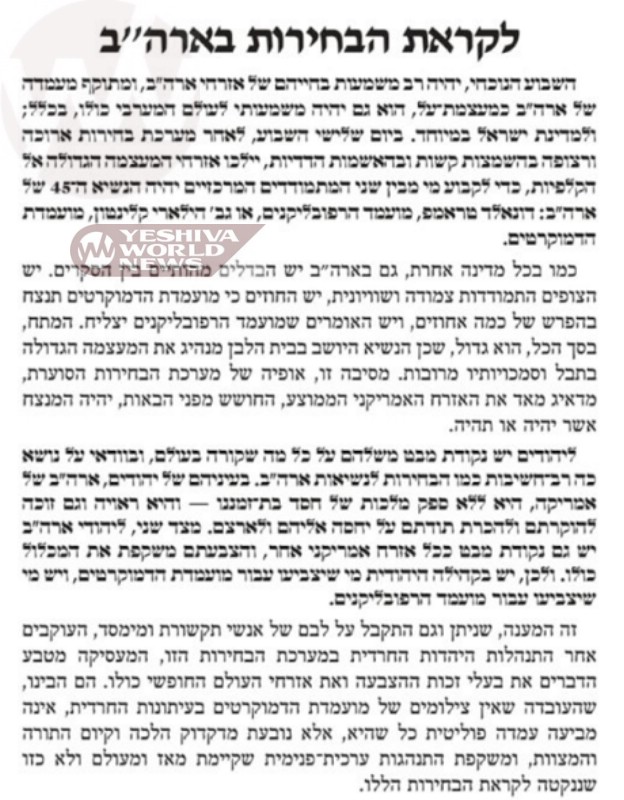 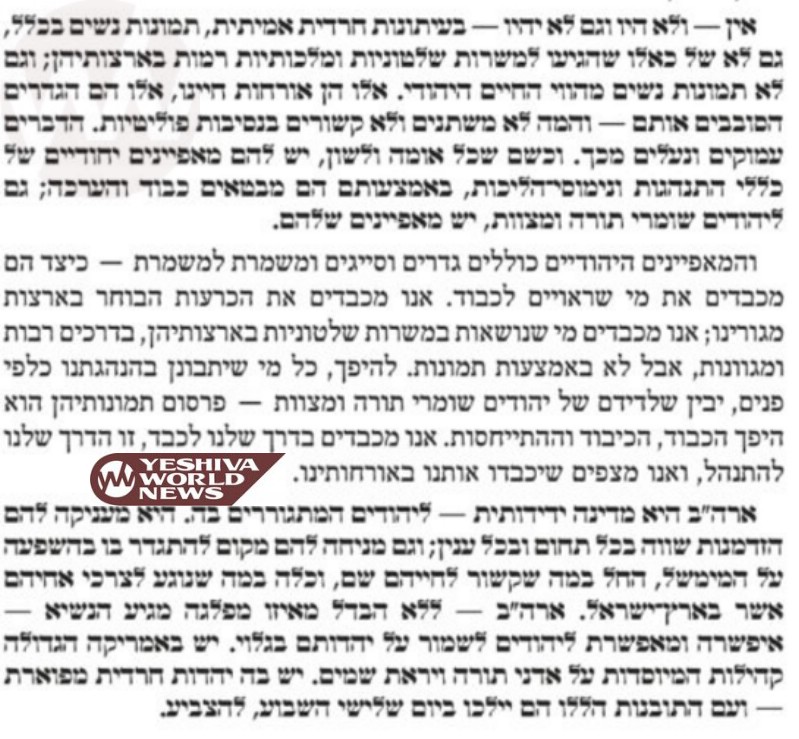