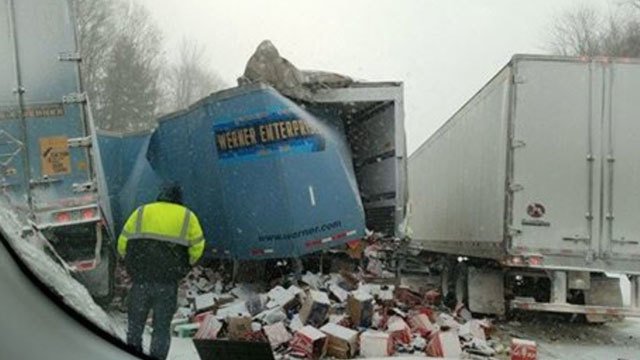 The Pennsylvania Department of Transportation says 59 vehicles crashed in a snowy pileup along a western Pennsylvania highway, and three people were hurt.

PennDOT spokesman Jim Carroll says 22 tractor-trailers and 37 cars are involved in the crash on Interstate 80 in Jefferson County.

The county’s director of emergency services, Tracy Zents, says the three suffered minor to moderate injuries and were transported to hospitals.

The crash was one of three that shut down different stretches of I-80 in the western part of the state.

Lake effect snow bands were being blamed for slick roads and poor visibility.

A jack-knifed tractor-trailer caught fire in Mercer County near the Ohio border.

Another crash closed a separate stretch of the highway.