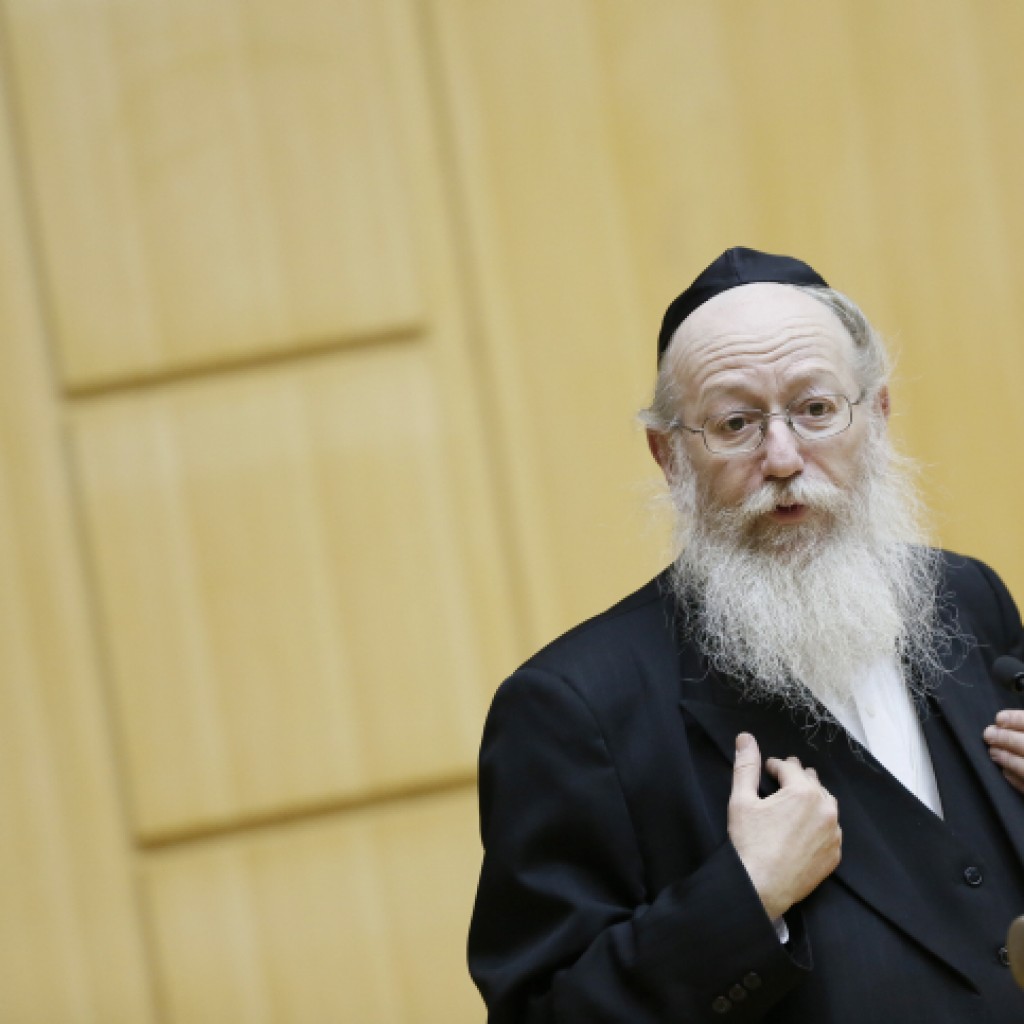 Part I: Health Minister Yaakov Litzman regularly emerges atop of the list in polls seeking to determine who the most popular cabinet minister is. He is viewed by the nation as one who is committed to his work, engulfed with the monumental task of rehabilitating the nation’s healthcare system.

Litzman is also an outspoken voice against junk food, having commented about distancing oneself from McDonalds and jelly donuts on Chanukah. What has many bothered is Litzman unwillingness to come out strongly against cigarettes and the tobacco industry, even voting against legislation seeking to limit cigarettes, leading some to dub him the Minister of Tobacco. According to the Israel Cancer Association, 8,000 Israelis die annually as a result of smoking, some 20+ times more than in car accidents. However, Litzman is caught on hidden camera in his office explaining he does not feel responsible to act in this area.

In the first of a two-part undercover series presented by Channel 2 News, including the use of hidden cameras and microphones, it has been learned that Litzman has met with the heads of the world’s tobacco industry, which he is prohibited from doing as Health Minister as per international treaties signed by Israel. He is also not reporting he met with them, another violation of the treaty.

Channel 2 decided to probe what is compelling his policy. Channel 2 correspondents posing as representatives of an electronic cigarette company approached an aide to Litzman which their report refers to as a “Macher from the Chassidus Litzman is affiliated with” and gave him a envelope with cash, which got them into his office. A second cash envelope gained them entry into the minister’s inner office, and a meeting with him.

Omri (correspondent’s name for the purpose of this investigation), represents a fictitious Japanese company importing electronic cigarettes, SEC (Smoke Electronic Cigarettes). Channel 2 points out that they opted to go with the electronic cigarettes after the Israel Cancer Association came out strongly against them, citing they are at least as dangerous as regular cigarettes, but Litzman refused to adopt this policy.

Channel 2 advertised the SEC product in Hamodia, aware it is affiliated with chassidim and Litzman. On a side note, Gerrer Chassidim do not smoke as per the rebbe’s instructions. The video shows that while Omri and others from SEC speak with the Hamodia staff, they ask if they are able to “hook us up to meet with Health Minister Litzman” to which they explain they can.

After signing on an advertising contract, the connection is made to introduce Omri to Minister Litzman. The undercover reporter meets with Hamodia correspondent and Gur Chossid Yaakov Reinitz, who is the go-between to Litzman. He promises a meeting, which “is expensive” with Moti Bobchik, the man who runs the minister’s office, adding “I cannot however promise the outcome of the meeting.

Ester, from Hamodia marketing is also involved and it is hinted how this must be done and that it will cost money. All sides agree as Esther explains “as a client of ours (Hamodia), it is in our interest to assist you”. Reinitz also explains that “Everyone knows that Hamodia is Litzman”.

In a subsequent meeting with Reinitz caught on hidden camera, Reinitz explains he was at the ministry working to set up the meeting but “There is one person in the way, Professor Itamar Grutto who is in charge of public health as he opposes the e-cigarettes. I am telling you in advance it is complicated to get to Grutto not black and white but I can tell you for now, he will not speak out against this”.

The meeting continues during which Reinitz is asked how much it will cost to meet with Grutto and he explains it depends on how long it takes, “usually between NIS 8,000-12,000. Reinitz agrees to NIS 4,000, accepting half in advance and the remainder following the meeting, promising the meeting within a week.

In subsequent conversations with Reinitz, it becomes clear to SEC that the company will be a favorite of the ministry and stands to gain by the connection made via Reinitz and Bobchik.

Reinitz then explains to Omri that Grutto has concerns regarding he international treaty prohibiting them from meeting with the e-cigarette company representatives and therefore, it might be best not to meet with him. He adds “I pressed and persuaded him and he will meet with you”.

It is pointed out that Grutto is not a political appointment but a professional who is responsible for the ministry’s policy vis-à-vis the public health system.

Omri is surprised when he arrives at Grutto’s office there are four senior physicians including two professors, all employees of the ministry. This too is on hidden camera. They are aides of Grutto and employees who are his subordinates. Omri is looking for assistance in importing the product without ministry interference. He is told there is no regulatory authority and they are free to import the electronic cigarette. “You have mazel there is a minister who is not exactly opposed to this”.

The forum then discusses the various studies pointing to problems and health concerns with e-cigarettes including a recent FDA report. After the meeting, Reinitz receives his second NIS 2,000 so within 10 days, for the fee of NIS 4,000, an e-cigarette importer received a meeting with senior Health Ministry officials, who promised not to interfere with importing a product that is harmful to the health of the general public.

Reinitz does not waste time and explains the next meeting is with Litzman and this will cost them NIS 3,000, informing them he will be there along with Bobchik.

The ministry and Minister Litzman’s spokesman deny any knowledge of payments nor the involvement of Reinitz. They explain anyone can and does meet with Litzman as was believed to be the case here, nothing more, and one is not required to pay for such a meeting. Hamodia distances itself from Reinitz’s actions. Reinitz explains he is a private individual and can act as a go-between for as long as he reports his income to the Tax Authority. He insists none of the money he received was given to Bobchik or Litzman or any other ministry employee.