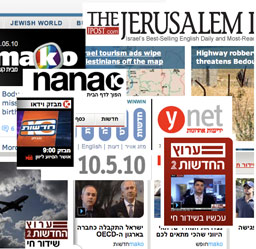 TGI on Wednesday, 27 Teves released it latest media survey in Israel. The dati leumi Makor Rishon newspaper has a 3.7 market share in the second half of 2016, representing a 0.2% increase from the first half of the same year.

The weekly BaSheva newspaper, affiliated with Arutz-7, registered a 1.6% decline during the same period and maintains a 6.1% market share in the second half of 2016 as opposed to 7.7% during the first half of the year.

Haaretz increases to 2.1% from 1% the previous year.

Kol Chai is down but still leading among chareidi radio stations with 5.07% of the listening audience as opposed to 5.37% percent in the previous poll.

The right-wing (Settler) Galei Yisrael received 2.4%, the same as in the last poll.,

Israel’s Hospitals On Verge Of Collapse, 1 Hospital Blocks Entry To...

SICKENING: BLM Complains That Shot Cops Are Treated as Heroes