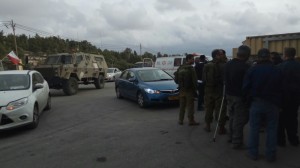 Magen David Adom is operating on the scene, confirming security officials on the scene are certain it was an act of terror and not a vehicular accident as believed to be the case.