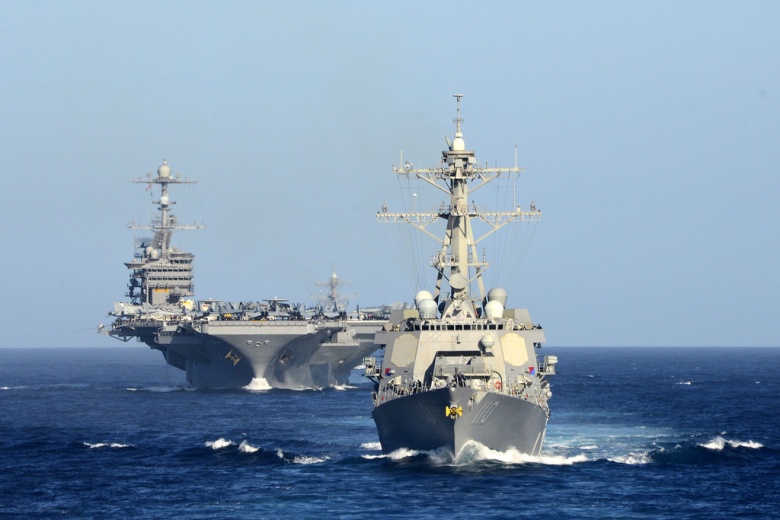 China said Monday it had lodged a formal protest with the United States over a decision to impose new sanctions targeting Iran, which affected a handful of Chinese companies and individuals.

The sanctions were imposed Friday after Iran conducted a ballistic missile test. They affect 25 people and entities allegedly involved in helping Iran develop its ballistic missile program, or in supporting groups that the United States considers terrorist, such as Lebanon’s Shiite Hezbollah militant group.

They include two Chinese companies and three Chinese individuals, who are now blocked from the U.S. financial system or dealings with U.S. companies. Foreign companies and individuals are also prohibited from dealing with them at risk of also being blacklisted by the United States.

“We have consistently opposed any unilateral sanctions,” Lu told a regular news conference. “The sanctions will not help in enhancing trust among the different parties involved and will not help in resolving international problems.”

China has close economic and diplomatic ties with Tehran, but also played an important role in a landmark 2015 deal to curb the nation’s nuclear program.

China’s state-run Xinhua news agency said the sanctions cast a shadow over the prospects for a peaceful settlement of the Iranian nuclear issue, and called them a “ticking time bomb” for peace and stability in the entire Middle East, an issue into which it said world leaders have invested enormous resources.

“It would be a colossal shame and unbearable misfortune for the globe if such efforts were thwarted by unchecked diplomatic adventurism and unconstructive antagonism,” it wrote on Saturday.

In Tehran, Iran’s Foreign Ministry spokesman, Bahram Qasemi, described the Trump administration as “still in an unstable stage,” but insisted that Iran did not conduct the recent missile launch to test the new White House.

“Iran’s missile test was not a message to the new U.S. government,” he was quoted as saying by Tasnim news agency. “There is no need to test Mr. Trump as we have heard his views on different issues in recent days … We know him quite well.”

Iran says its missile launches do not violate U.N. resolutions since the missiles are not designed to carry nuclear warheads. The Trump administration, however, views the launches as provocative and has vowed to curb Iran’s missile program.

China has previously been angered by U.S. sanctions against Chinese firms accused of supporting Iran or North Korea’s nuclear ambitions.

Executives from the two Chinese companies included on the list denied doing anything wrong.

Yue Yaodong, an executive at Cosailing Business Trading Co in the eastern city of Qingdao, said his firm was “collapsing,” with his account at the Agricultural Bank of China frozen, a shipping company refusing to accept his goods and clients abandoning him.

“We have not done any business with Iran for three to four years,” he said. “There have been some Iranian customers coming to us asking prices, but we have not conducted real business. Go search the customs record.”

He said his company sells items for everyday use, as well as porcelain, hydraulic parts, and motors for treadmills, but said it was only a small, private firm.

“I am so lost, both the United States and China are sanctioning me,” he said. “There is no way to do business now, I don’t know what our little company did wrong.”

An export manager at Ningbo New Century Import and Export Company, based in the eastern city of Ningbo, told the Reuters news agency it had only carried out “normal” exports to Iran, but did not elaborate.

U.S. relations with China have hit a distinctly rocky patch since Trump took office, with the new president seeing the government in Beijing as more of a threat than a partner.

Indeed, President Trump has yet to speak to his Chinese counterpart Xi Jinping since taking office, despite talking to at least 18 other world leaders.

But nerves in Beijing appear to have been somewhat calmed by comments from Defense Secretary Jim Mattis while on a tour of Japan and South Korea last week.

Mattis took pains to reinforce previous U.S. commitments to Tokyo and Seoul, pledging to press ahead with deployment of a high-end missile defense system to South Korea this year, and vowing to honor a mutual defense pact with Japan.

But he also called for diplomatic efforts to resolve the dispute in the South China Sea and played down the need for U.S. military maneuvers there.

His remarks followed comments from other Trump administration officials that appeared to suggest the possibility of a naval blockade of China’s artificial islands, something that experts say could amount to an act of war.

China’s Lu said the U.S. stance towards South Korea and Japan could jeopardize regional security, but he said the remarks about the South China Sea were “worthy of affirmation.”

The official English-language China Daily newspaper said in an editorial on Monday that Mattis’s comments were a “mind-soothing pill” that had “dispersed the clouds of war that many feared were gathering over the South China Sea.”

“Mattis has inspired optimism here that things may not be as bad as previously portrayed,” the newspaper said.