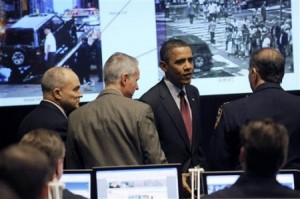 Joining Mayor Michael Bloomberg, Police Commissioner Ray Kelly and other officials in the Real Time Prime Center, the president praised the patrol officers and mounted police officers who dealt with an explosives-filled SUV in Times Square earlier this month.

“I was telling the mayor and the commissioner that the work that the NYPD does in coordination with state, federal, local officials when it comes to counterterrorism is a model for the country. It has been for some time,” said Obama.

He also said that he would make sure the NYPD would receive “what [it] would need” in funds to fight terrorism.

Kelly then presented the president with an NYPD-themed jacket.

However, White House officials said the city will see a 47 percent increase in funding and overall receive one-third of money spent on anti-terrorism measures.

During the president’s meeting with the NYPD, police inspected a suspicious-looking car near One Police Plaza, but determined it contained nothing dangerous.