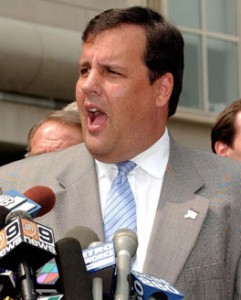 If he succeeds, Gov. Chris Christie (R-N.J.) could become a major political force in the years to come, whether he likes it or not.

As the United States watches a debt crisis in Greece like a fiscal oil spill, waiting to see where it will spread first and when it will make landfall on our shores, Christie is tackling the nation’s worst state deficit — $10.7 billion of a $29.3 billion budget. In doing so, Christie has become the politician so many Americans crave, one willing to lose his job. Indeed, Christie is doing something unheard of: governing as a Republican in a blue state, just as he campaigned, making good on promises, acting like his last election is behind him.

Upon taking office Christie declared a state of emergency, signing an executive order that froze spending, and then, in eight weeks, cutting $13 billion in spending. In March he presented to the Legislature his first budget, which cuts 9 percent of spending, including more than $800 million in education funding; seeks to privatize numerous government functions; projects 1,300 layoffs; and caps tax increases.

Teachers unions are incensed, fighting Christie’s proposal that — in order to avoid cuts to education — teachers accept a one-year wage freeze and contribute 1.5 percent to the generous-by-every-standard healthcare plans they now enjoy for free. New Jersey, which has the highest unemployment in the region and highest taxes in the country, lost 121,000 jobs in the private sector in 2009 while adding 11,300 new education jobs. During the last eight years, K-12 enrollment rose just 3 percent while education jobs increased more than 16 percent. According to the Newark Star-Ledger, during the recession that has cost many residents their homes and jobs and scaled back hours and pay for the employed, teachers’ salaries rose by nearly 5 percent, double the rate of inflation.

Christie is adamant about lowering taxes. After taxes were raised 115 times in the last eight years, he said the wealthy are tapped out. Property taxes rose nearly 70 percent in the last decade, and studies show top earners — the 1 percent of taxpayers paying 40 percent of income tax — are fleeing the Garden State.

The goal is not just to crawl out of crisis but ultimately to lead, said Christie in his budget address. “If we make the tough decisions now, we will be one year ahead of 80 percent of the states in the race to economic growth. If we fail to act, we will fall even further behind … by going first, we can become first.”

Can Christie succeed? We will find out on June 30, when the Legislature must pass a budget . But no matter the political price, Christie is determined. “You just have to stand and grit your teeth and know your poll numbers are going to go down — and mine have — but you gotta grit through it because the alternative is unacceptable,” he told The Wall Street Journal.

The alternative is unacceptable — words a growing majority of Americans desperately want to hear from their elected officials.