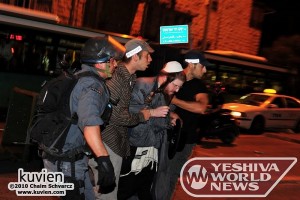 While the removal of the bones at the Barzilai Hospital site has been completed, the matter is not forgotten, not to mention ongoing excavations in the Jaffa area of Tel Aviv.

Protests continued in Yerushalayim on Sunday morning, and stormy protests took place in Jaffa, at the site of the excavations. A large force of anti-riot police were on hand Sunday, but the force was unsuccessful in preventing the protestors from reaching the location. Among them was prominent Eida askan R’ Isaac Weiss, who reports he was hit with teargas and detained along without about 20 others. They were taken to a Tel Aviv police station. The detainees accuse police of using unjustifiable force against them.

Loudspeakers are heard in the capital on Sunday afternoon, calling for additional protests on Sunday evening to halt the excavations and to demand the release of the detainees being held in Tel Aviv. Protests are also likely in Ramat Beit Shemesh on Sunday evening.

Member of the Badatz Eida Chareidit are expected to take part in protests on Monday as well according to ‘Kol Chareidi’.