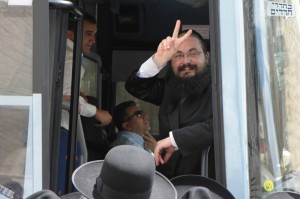 11:15AM IL: The High Court of Justice has accepted a compromise agreement presented to the court on Sunday morning, hopefully brining an end to the Emanuel Beis Yaakov case. It appears that Justice Minister Prof. Yaakov Ne’eman became personally involved and the sides sat at his home for many hours on motzei shabbos to complete an agreement.

The sides, the Ashkenazi and Sephardi girls will complete the school year together, in desegregated classrooms, but the curriculum will be modified, breaking from the regular standard classroom subject matter. This is in line with Aryeh Deri’s original call for an agreement, suggesting that bring the girls together in a camp-like atmosphere, not school, and swallow the pill for two weeks to avoid parents going to prison.

Slonimer Chassidim have agreed to remove the physical partition in the school and in return, the Sephardim will withdraw all court petitions. Justice Edmond Levy at about 10:20am Sunday morning announced the agreement is accepted and that the parents are released to their homes.

Yahadut HaTorah has announced it is dismantling the protest solidarity tent outside Massiyahu Prison. A faction meeting is planned for 12:00pm to decide what arrangements will be made to formally greet the fathers who are being released from prison as we go to print.