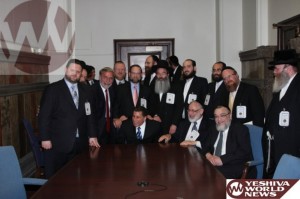 New York State’s legislative leaders were congratulating themselves for finally passing a budget on Monday, despite the fact that the budget was a historic 125 days late. Amid the $136 billion in approved spending, there was one major item of importance to the yeshiva community that was left out: TAP. Only a few weeks ago the community’s askanim and state elected officials were celebrating the historic passage of TAP, which would have provided millions of dollars for yeshiva gedolas, by the New York State legislature (link). It now appears that the TAP funding was wrapped up as part of a package of an additional $419 million in new funding for public schools which Governor David Paterson had promised all along to veto.

The Governor explained his reasoning for vetoing the education package of funding, “Rather than act in the interest of the people of New York state, [the Legislature has] engaged in legislation that is in [their] self-interest and have presented us with a series of bills that have the same gimmicks, chicanery and avoidant conduct that has characterized fiscal management in this state for far too long,“ the Governor explained at the time. Despite the Governor’s veto, askanim and state elected officials who spoke to YWN insisted that the funding for TAP would be restored when the budget process would be complete. Now that the process is complete, there appears to be little hope for these funds getting restored.

Aside for TAP, there was also no restorations of hundreds of thousands of dollars in “pork barrel” funding that were earmarked in the budget for major Jewish groups including Agudath Israel of America, the Metropolitan Council on Jewish Poverty, Ohel and countless JCC’s in New York. As a result, one askan, who insisted on anonymity because he works with many elected officials, summed up the completion of this year’s budget by saying, “in all the years that I have been working with politicians, this may have been the worst year vis-a-vis state government and the Jewish community in New York State. In short, the promises of our elected state representatives did not materialize. We very well may need to re-assess our relationships with some of our elected officials in the upcoming elections.”