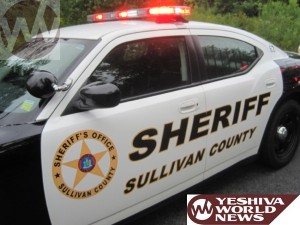 Detectives from the Sullivan County Sheriff’s Office have arrested a man from Monroe, NY on charges that he altered and or forged numerous checks that were intended for his employer. Julian Arvelo, 48, was charged with Forgery in the 2nd degree, Possession of a Forged Instrument in the 2nd Degree, and Grand Larceny in the 3rd, all class “D” Felonies.

Arvelo is a paper carrier for Hudson News which is the company that supplies NYC metro area newspapers like The Daily News and NY Times to gas stations and convenience stores in Sullivan County. As part of his route, Arvelo is supposed to collect checks as payment for the newspapers from the various stores.

It is alleged that over the past few months, Julian Arvelo altered the checks intended for Hudson News, and deposited them into his own personal account. Detective Sergeant Don Starner who is leading the investigation said, “the theft is in excess of $3,000 dollars and we are still counting”.

All the banks and merchants who are affected are cooperating with the Sheriff’s Office. Arvelo was arraigned before Town of Bethel Kevin Rhyne and sent to the Sullivan County Jail without bail pending a future court appearance. The investigation is continuing.