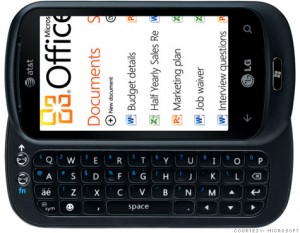 Microsoft on Monday unveiled its plan to battle the iPhone, Android and BlackBerry smartphones with its new Windows Phone 7 mobile operating system.

At a press event in New York, Microsoft CEO Steve Ballmer said that Windows Phone 7 smartphones would be available in the United States on AT&T’s network.

“When Microsoft first showed us Windows Phone 7, we knew it was going to be a winner,” AT&T CEO Mobility and Consumer Markets Ralph de la Vega said at the event. “It was different than anything we’ve seen.”

Microsoft also announced partnerships with Samsung, LG and HTC, which will make devices to run the new smartphone software.

Samsung’s phone, called the Focus, will be available on November 8, and the Surround from HTC and Quantum from LG would be in stores in time for the holidays, Microsoft said. All three phones will cost $199.99.

“It’s a different kind of phone,” he said. “It gets you in, gets you out, and back to life as fast as humanly possible.”

Instead of the typical smartphone user interface — a series of small icons to launch applications — Windows Phone 7 uses large, dynamic tiles that Microsoft hopes will be both intuitive to use and easy to navigate.

Social networking is baked in, with a “people hub” that tracks updates across a user’s contact list. A camera button wakes the phone into shooting mode quickly, so that it is able to almost instantly begin snapping photos. Games are a focus: Xbox Live players can take their accounts on the go, and Electronic Arts is a launch partner, bringing the Sims game to the phones.

Windows Phone 7 integrates deeply with other Microsoft products. Notes taken on phone with OneNote automatically sync to the cloud with Office Live. Along with top-notch support for Microsoft Outlook and Exchange — which should make corporate IT departments very happy — the phones offer a spell check that automatically underlines misspelled words with the red squiggly line familiar to Word users.

But one feature was noticeably missing at launch: copy/paste. Microsoft didn’t put that in the original code because it didn’t think it would be needed, thanks to auto-links between applications, a company executive said. But developers demanded it, and Microsoft plans to add it in an update in early 2011.