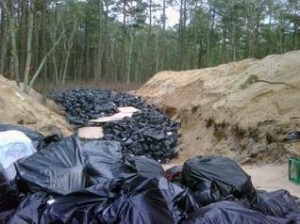 A deputy state attorney general has told a judge that New Jersey officials “looked the other way” while a rabbi buried truckloads of bagged religious artifacts on a property in Ocean County.

And they only took serious legal action when a similar illegal landfill was dug in another town a year later, the deputy said during a court hearing Friday.

The comments came after hours of wrangling over a lawsuit filed earlier this year by the state Department of Environmental Protection. It seeks the cleanup of burial sites in Lakewood and Jackson, claiming they violate state law and pose potential public health risks.

The case appears likely to go to trial in mid-February, after state Superior Court Judge Craig L. Wellerson denied DEP’s request to order that the cleanups be done immediately.

The burials have sparked controversy over what the limits should be regarding leniency for religious customs.

The buried material, including texts and clothing, called shaimos, is considered holy by Orthodox Jews and therefore cannot be discarded in the usual ways. The sites, however, are near a water well and protected wetlands.

Wellerson at one point asked the deputy attorney general, Daniel A. Greenhouse, if it was “really” the state’s argument that the DEP allowed a project it knew was illegal.

Greenhouse initially acknowledged that DEP officials were present at the Jackson site during construction and had even given approval. He then backed off from these comments, saying the officials “looked the other way” because they saw the burial as a one-time event and planned to settle the issue with citations.

“(The DEP) can’t prosecute every tiny, little violation it sees,” Greenhouse said. “Then the following year, (the rabbi) did it again at twice the volume.”

Lawyers for the five defendants questioned why, if the DEP saw the burials as an environmental risk, it let one stay underground for more than a year.

“If it’s a public health hazard, the DEP’s not doing its job,” said Steven Secare, who is representing the rabbi, Chaim Abadi.

Wellerson said he was not “satisfied that there’s any immediate health hazard.”

Abadi has found a new place for the material in a Lakewood Jewish cemetery, but needs the DEP to approve it first and 45 days to make the move, according to defense lawyers. But an agreement could not be reached.

Cemeteries have long been a place to bury shaimos.

Based on court discussions Friday, the trial will likely focus on whether the material qualifies as solid waste, and therefore should be moved to a licensed landfill, and will include testimony from several DEP officials.

The DEP said it was alerted to the Jackson site off Frank Applegate Road in April 2009 and the Lakewood site off Vermont Avenue in March 2010.

In addition to Abadi, others named as defendants in the suit are Hard Maple Realty LLC, Vincenzo W. Mettee, Champion Subcontracting and Congregation Minyan Shelanu.