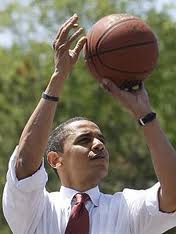 The White House says President Barack Obama has received 12 stitches in his lip after being hit during a pick up basketball game.

The president received the stitches in the doctor’s office on the ground floor of the White House. Obama had traveled to Fort McNair with a group of family and friends for an early morning game of basketball.