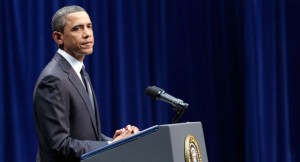 President Obama also delivered miraculous news at tonights memorial: that U.S. Representative Gabrielle Giffords, 40, who received a bullet wound to the head that traveled the length of her brain on the left side, “has opened her eyes for the first time.” He repeated the statement several times, as if to let its significance about her condition sink in.

The President added that, no matter how long it may take, the country will be with Giffords “every step of the way” as she makes her recovery. “She knows we are here, she knows we love her  and she knows we are rooting for her,” he said.

When the President made his announcement, all 14,000 people in the hall, including Michelle Obama, who held the arm of Giffords’s husband, NASA Shuttle Commander Mark Kelly, rose to their feet for a prolonged ovation. Most of them, including Mrs. Obama, also wiped away tears – a gesture repeated only moments later, when Kelly and Daniel Hernandez, the 20-year-old intern credited with saving the life of Rep. Giffords, embraced after the President’s introduction.

House Minority Leader Nancy Pelosi, Sen. Kirsten Gillibrand and Rep. Debbie Wasserman Schultz, all close friends of Rep. Gabrielle Giffords, were in the hospital room with the Arizona Democrat when she opened her eyes for the first time since she was shot in the head Saturday during a rampage that killed six in Tucson, Ariz.

Obama, who visited the hospital Wednesday, was not in the room at the time.

He said Giffords’s husband, astronaut Mark Kelly, had given him permission to relay the latest positive sign of Giffords’s recovery.