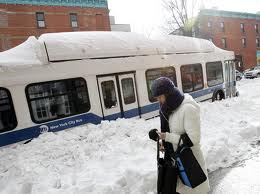 MTA officials will feel the heat Friday as the City Council opens another hearing into the transit mess during the holiday blizzard.

The City Council held a meeting earlier this week in which the Bloomberg administration came under fire. This time, it’s the MTA’s turn. Union leaders will be at the meeting to tell holiday blizzard horror stories. Many blame the MTA for not stepping up during the storm.

And transit riders get to revisit those experiences today, when the City Council transportation committee looks into MTA foul-ups and meltdowns during the storm.

The blizzard clobbered drivers and riders on every branch of mass transit. Buses were stranded, trapping passengers for hours, and subways seemed even worse.

Eyewitness News covered the A train episode in which people spent an entire night trapped on a freezing train in sight of a station.

City Council members want to know why it took so long for the MTA to activate its emergency plan and rescue passengers.

For the commuter lines, Metro-North barely struggled through the storm. But the Long Island Rail Road suffered the worst service collapse in its history.

Trains stopped running, and it took days to restore real service. The MTA’s own inspector general is reviewing how the agency prepared and responded to the storm. But the City Council wants these committee hearings to give it an outsider perspective. And commuters could give them one.