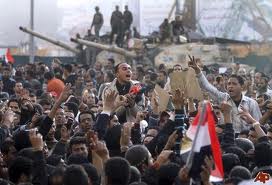 5:29PM EST: What started out as a peaceful demonstration in Alexandria, Egypt, between anti-government, and pro-Mubarak protesters, has turned violent – with machine gun fire heard. Two large groups of people have started throwing stones and bottles at each other, and has escalated quickly. Al Jazeera live is showing images of the confrontation, which shows the army trying to keep the two groups away from each other, but are having difficulty. The gunfire is being fired by the army into the air, to try and disperse the crowd, which is not working. [Click HERE to listen to audio clip of gunfire (1:00)]