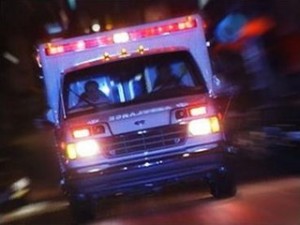 Brighton, NY – An ambulance transporting a patient from the Jewish Home in Brighton on its way to Strong Memorial Hospital in Rochester on Sunday afternoon was struck by a vehicle. The patient being transported in that ambulance died as a result of the crash and two others were injured, according to Brighton Police.

According to police, 82-year-old Erwin Leonard had been picked up at the Jewish Home by ambulance and was being transported to Strong Memorial Hospital at around 2 p.m. Sunday.

The ambulance was heading north on South Winton Road when it was struck by a car while attempting to turn onto the 590 ramp, said police.

Leonard and two Rural Metro employees were injured as a result of the crash and taken to Strong Memorial Hospital, according to police.

Police said the two workers suffered only minor injuries, but Leonard died as a result of the crash.

The two occupants of the car, Edith Warner, 84, and Abe Levitt, 98, were also taken to Strong Memorial Hospital, where they were reported to be in satisfactory condition as of Sunday evening.