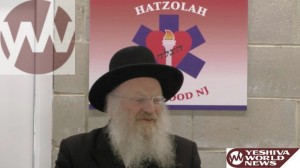 Hundreds gathered for a Ribbon Cutting Ceremony Sunday afternoon, in honor of the opening of the new Hatzolah Garage, donated by Mrs. Klara Ringel and family. The garage was donated in memory of Mr. David Ringel.

The event, which took place at the garage located at the intersection of Central Avenue and New Central Avenue, was attended by many officials – locally and from Ocean County– as well as by the extended Ringel family.

Also in attendance, was the BMG Mashgiach HaRav Matisyahu Solomon Shlita, who addressed the gathering.

The garage was strategically situated in a location where it can service the over 1800 families in the Westgate community and other communities South of the Lake.

The garage is equipped with both ALS and BLS Ambulances.

The main Hatzolah Garage, which has offices, and a training facility is located on Eastwood & Countyline. The second garage is on Monmouth & 3rd Street, and the new garage is at Royal Court – at the intersection of Central and New Central.