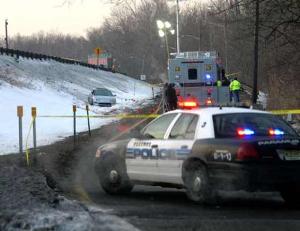 A Paramus police officer shot several times in the stomach was in critical but stable condition Monday morning following a pursuit on Route 17 that ended near the entrance to the Garden State Parkway, Bergen County Prosecutor John L. Molinelli said. The driver of the car she was pursuing was in critical condition after a shootout with backup Paramus officers.

The Paramus officer, Rachel Morgan, 31, was shot multiple times and underwent surgery Monday morning at Hackensack University Medical Center, Molinelli said. She was rushed there after the shooting.

“She is a great police officer, a very hardworking dedicated police officer,” said Paramus Capt. Kevin Smith. “She’ll make it through this. Everyone is at the hospital. She’s a nice person.”

Morgan’s family is at her side, and the community and area officers are rallying for her, Molinelli said in a statement.

Morgan is a four-year veteran officer who has been with Paramus for two years. She previously worked for the New Jersey Institute of Technology Police Department.

She was wearing her bullet-proof vest when the suspect — identified by prosecutors as Michael Sean Carmody — shot her, Molinelli said. Carmody, 23, of Westwood, underwent surgery at St. Joseph’s Regional Medical Center and was in critical condition.

Morgan was shot five times: twice in her vest, twice in the lower abdomen and once in the leg, a source close to the police department said. Carmody was shot six times, the source said.

Carmody allegedly initiated the shooting. He, Morgan and an unidentified backup officer fired a “considerable” number of rounds in the shooting, which began around 11 p.m. Sunday. Prosecutors said they cannot determine how many rounds were fired until the investigation is complete.

The incident began when the officer attempted to pull over a silver car Carmody was driving. He instead peeled away at a high rate of speed, causing him to lose control on the entrance ramp from Route 17 to the Garden State Parkway, Molinelli said. Morgan had been pursuing the vehicle on Route 17 south.

Paramus police, prosecutor’s detectives and the state police were investigating at the scene until about 8:30 a.m. Monday morning when they towed away the silver car, its driver-side door appeared to be riddled with bullet holes. Investigators closed the entrance ramp from Route 17 to the southbound parkway while they worked.