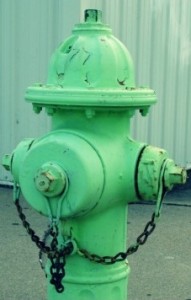 Brooklyn – Councilman David G. Greenfield will introduce legislation on Wednesday aimed at increasing legal parking spaces in New York City. The bill would require that all non-functioning fire hydrants across the five boroughs be painted green to signify that parking next to the hydrant is permissible. Greenfield, who has introduced and co-sponsored several pieces of legislation aimed at making parking easier for New Yorkers, believes that this latest bill will not only increase the number of legal parking spaces, but will also address safety concerns arising from non-repair of broken hydrants.

“I drafted this bill with an eye toward making it easier to park in New York City,” said Councilman Greenfield. “However, I believe there are also added safety benefits. Residents will be able to easily identify a broken hydrant on their street thanks to a coat of green paint. Not to mention, firefighters responding to emergencies won’t waste precious seconds trying to connect to a broken hydrant.”

Comptroller John Liu released an audit in January detailing the number of non-functioning “high-priority” hydrants throughout the city and the Department of Environmental Protection’s repair response time, which was shockingly low in some areas, particularly Councilman Greenfield’s home borough of Brooklyn. High priority hydrants are defined as those located next to a hospital, school or senior citizens’ residence, or any that are the only fire hydrants on their block. The audit only explored high priority hydrants, meaning hundreds of other “low priority” hydrants could remain non-operational for weeks or months.

“By the Department of Environmental Protection’s own admission, many hydrants are broken across New York City,” noted Councilman Greenfield. “DEP estimates that, at any give time, over 1,000 hydrants are non-operational. That means upwards of 3,000 parking spaces could be available on city streets. Not to mention that over 1,000 non-operational hydrants puts New Yorkers at risk. A quick coat of paint will keep New Yorkers and first-responders informed. Hopefully, it will also encourage DEP to keep up with hydrant repairs.”