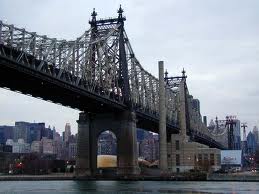 The City Council voted 38-12 today in favor of renaming the bridge for the former mayor.

The council’s Parks Committee voted 6-1 in favor of the proposal yesterday.

“When the mayor asked me if he could submit the legislation to rename the Queensboro Bridge the ‘Ed Koch Queensboro Bridge’ — in Manhattan, it’s known as the 59th Street Bridge — I said that was a great honor, but I wasn’t going to lobby for it,” said Koch.

Lawmakers who voted against the measure, includes some from Queens, said the bridge should retain its old identity.

“The Queensboro Bridge has the name of our borough in it, and I think many people in the borough feel a sense of pride about that. A sense of ownership, a sense of history of our borough,” said Queens Councilman Jimmy Van Bramer.

A recent Quinnipiac University poll found 64 percent of city voters are opposed to renaming the bridge, and 70 percent of Queens residents want the bridge to keep its current name.