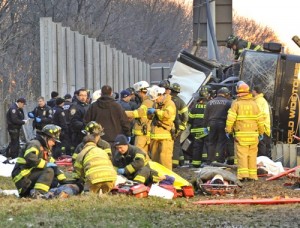 Nearly three weeks after a bus crash in the Bronx left 15 people dead, the chair of the National Transportation Safety Board says the bus was speeding at up to 78 miles per hour.

The official also said a video camera on the windshield failed to record the accident.

The news came at a U.S. Senate hearing on bus safety Wednesday, following a number of deadly accidents.

Lawmakers want to know why the Transportation Department has been slow to implement safety measures recommended by the NTSB.

Some of the recommendations were made more than a decade ago.

They include requiring seatbelts for all passengers, and stronger roofs to keep them safe in the event of a rollover.

During the deadly March 12th crash the tour bus veered off the road, toppled on its side and slid into a highway sign that sliced through its roof.

The driver of the bus, Ophadell Williams, has not been charged, but has been sued by two passengers.