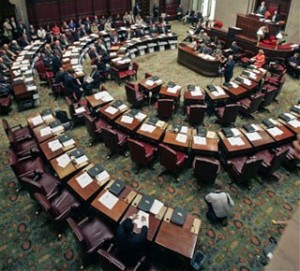 To the soundtrack of chanting protesters who draped banners from staircases and banged on the doors of the legislative chambers, lawmakers finished approving Gov. Andrew M. Cuomo’s budget early Thursday morning, making for the state’s first on-time spending plan in five years.

The State Capitol was a place of pandemonium well into the night, with officials scrambling to get the education and health care parts of the budget printed so lawmakers could vote on them. The Senate passed its last budget bill about 11:30 p.m., while the Assembly finished about 1 a.m.

The $132.5 billion budget, which hews closely to what Mr. Cuomo proposed two months ago, cuts year-to-year spending for the first time in more than a decade and imposes no major new taxes. The Legislature’s approval cemented a huge political victory for the governor, who praised legislative leaders early Tuesday “for this demonstration of competence” — something for which Albany is not exactly known.

“This bipartisan and bicameral cooperation will give New Yorkers the good budget they deserve,” Mr. Cuomo said in a statement. “It was an invaluable public service for the state government to ‘function’ so well at this difficult time.”

At times, the scramble to approve Mr. Cuomo’s budget on Wednesday seemed to be overshadowed by the chaos at the Capitol. In a last hurrah of sorts, hundreds of New Yorkers unhappy about cuts arrived and promised a Wisconsin-style sleepover, even if it seemed far too late for such an effort to matter.

Legislators appeared on edge. At times, a state trooper armed with a Taser stood guard near the Senate lobby. The Assembly closed its gallery because it did not have enough people to handle crowd control. One protester was arrested for reportedly hitting a legislative staffer in the head with a cymbal.

Lawmakers, meanwhile, sprinted to approve the dozen or so bills that make up the budget, starting with less contentious measures and finally taking up the portions of the budget dealing with state funding for schools and local governments late Wednesday. At times, legislators did not seem entirely sure about what they were voting on. It was not until after nightfall that they received a district-by-district breakdown showing how state school aid would be distributed, an annual sticking point in budget negotiations.

But aides to Mayor Michael R. Bloomberg were quick to criticize the city’s share, saying that the release of the school district data only minutes before the education budget bill was to be debated was an example of Albany at its worst. “We are dividing up crumbs, and to make matters worse, the crumbs have been divided unfairly,” said Micah C. Lasher, the city’s director of state legislative affairs.

The Legislature’s deadline to pass the budget was 12:01 a.m. Friday, when the state’s next fiscal year begins. Lawmakers had hoped to finish a day early, a feat of punctuality that has not been accomplished since 1983, when Mr. Cuomo’s father, Mario M. Cuomo, was in his first year as governor.

For much of Wednesday, they kept an early budget as their goal. But debate in the Assembly stretched past midnight, meaning that lawmakers had to be content with merely an on-time budget. That was still a political feat: only six times since 1975 has the state passed a spending plan by the time March turned into April.