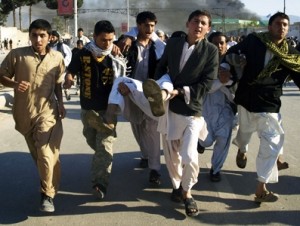 Two of the foreign dead reportedly were beheaded, Reuters reported.

The other four dead were protesters, the Associated Press reported.

“We can confirm an attack on the UN mission in Afghanistan’s operations center in Mazar-i-Sharif, and can confirm that there have been deaths of UN personnel,” deputy spokesman Farhan Haq said at UN headquarters in New York. “The situation is still confusing and we are working to ascertain all the facts and take care of all our staff.”

UN Secretary-General Ban Ki-Moon’s special representative in Afghanistan, Staffan De Mistura, was “on his way to Mazar-i-Sharif now to deal with the situation personally on the ground,” AFP reported.

The rampage began when demonstrators marched in Mazar-i-Sharif and in the capital Kabul on Friday to protest the burning last month of Islam’s holy book by Florida pastors Terry Jones and Wayne Sapp. Jones reportedly put the Koran “trial,” then supervised Sapp as he burned the book.

Afghan President Hamid Karzai condemned the burning, and called on the U.S. to bring those responsible to justice.

Jones captured headlines last September when he threatened to burn the Koran on the anniversary of the Sept. 11, 2001 terror attacks. Jones canceled the burning after appeals from several world leaders, including President Obama.

Jones, meanwhile, issued a statement Friday, calling on President Obama to “take a close, realistic look at the radical element Islam… It is time that we call these people to accountability.”

Last month’s Koran burning also was blamed for an attack earlier this week on a Catholic church in Pakistan. Government officials said the attack was directly related to the Koran burning, but Msgr. Anthony Rufin, bishop of Islamabad, would not link the two incidents.