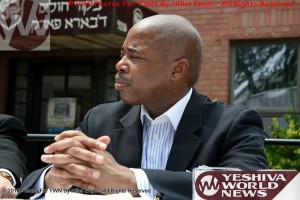 A Manhattan hearing on homeland security exploded yesterday after an Arab-American activist testified that she was taught as a youngster to “hate Jews” and “hate America,” enraging a Brooklyn lawmaker who gripped a Koran and grandly accused her of spreading “hate and poison.”

State Sen. Eric Adams (D-Brooklyn) interrupted, holding up a copy of the Koran.

“This is offending this hearing by having her here,” Adams declared. “This is not our enemy . . . You’re bringing hate, hate and poison into a diverse country.”

Chairman Greg Ball (R-Putnam) instructed Adams to pipe down and suggested he was playing to the TV cameras.

“I’m glad no one is between those TV cameras and you because that’s the most dangerous place in New York City right now,” Ball said.

“This, obviously, is her assessment how she was brought up in her life,” he said. “It doesn’t have anything to do with the good Muslin Americans who live in this country.”